Menlo-Atherton Robotics Team participates in its first competition since 2019 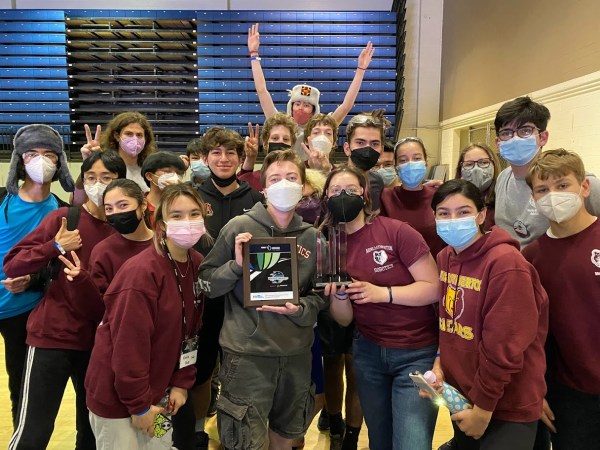 The Menlo-Atherton Robotics Team — FIRST Robotics Competition Team 766 — participated March 24-26 in their first FRC Competition of the year: the Sacramento Regional at UC Davis. Competing against 42 other teams, the M-A Bears made it to the quarterfinals as part of the 5th seed alliance with Team 1160 “Titanium Robotics” from San Marino High School and Team 701 “RoboVikes” from Vanden High School.

The M-A Bears finished their qualifying rounds ranked 21 with a win-loss record of 5-7 before losing 2-0 in the quarterfinals to the 4th seeded alliance. They also won the Gracious Professionalism® Award, an award granted to the team that demonstrates a competitive spirit while maintaining respect and empathy towards other teams both on and off the field.

Coming out of the COVID-19 pandemic, the Menlo-Atherton Robotics Team was eager to compete in its first in-person FRC competition since 2019. Before attending the competition, the team designed and built a robot from scratch to accomplish the designated year’s challenge. This “build season” starts in early January then ends at the competitions that take place in March and April. The M-A Robotics Team worked more than 16 hours a week during the build season aided by sponsors Round Table Pizza, Blue River Technology, American Prototype & Production, Lockheed Martin, Google, and Menlo-Atherton High School.