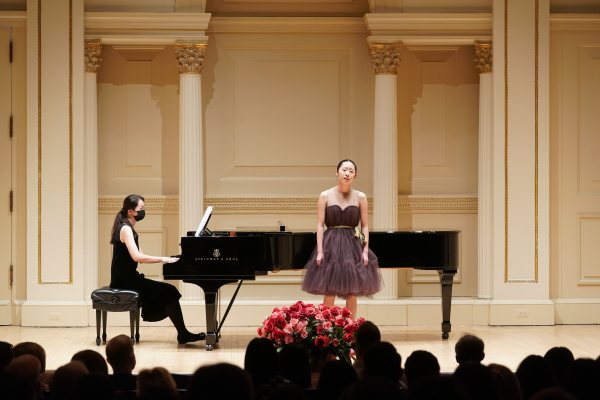 Sacred Heart Preparatory (SHP) junior Kelly Shen remembers the moment high schooler Veronica Mendoza (SHP ’15) took the stage for rehearsals in the all-school play Beauty and the Beast and began to sing in a rich, operatic soprano voice. Then a second grader, Shen was mesmerized. She thought to herself: Maybe I could sing opera one day.

Nearly a decade later, at 17-years-old, Shen has realized that ambition, having performed an opera aria at Carnegie Hall in New York City as a winner of the American Protégé International Voice Competition.

During the Carnegie Hall event, she was joined by 40 other soloists in a range of age categories from around the world, from a young Japanese boy to a teenager from Eastern Europe, to seasoned Broadway performers.

Leading up to this pivotal moment, Shen concentrated on growing her performance and vocal abilities. That meant performing in every school play at Sacred Heart Schools, Atherton (SHS) from first through eighth grade, and participating in choir from fourth grade through freshman year (she’s taken a break the past two years to focus on academics).

Her theater education has been invaluable, says Shen. “Participating in school plays and just growing as a student here—becoming more confident in my academic and other abilities—has really allowed me to gain the confidence and trust in myself that I need to perform. Walking onto the stage at Carnegie Hall, you have to put on that diva personality.”

Her first role was as a baby chicken in the school production of Honk (a twist on the ugly duckling story), when she was in the first grade. She gradually took on larger roles with solos, and in the eighth grade landed the title role in Mulan, Jr. That was the year she also joined the San Francisco Conservatory of Music (SFCM), where she spends every Saturday from 10 a.m. until 6 p.m. in workshops and rehearsals, her supportive parents shuttling her back and forth to the city.

For her Carnegie Hall performance, she chose Psyche by French composer Émile Paladilhe. Singing in a mezzo soprano voice, she portrays Cupid falling in love with Psyche. As the story goes, a jealous Venus instructs Cupid to shoot his arrow and cause Psyche to fall in love with the most horrible being in existence. Instead, upon laying eyes on Psyche, Cupid himself becomes lovestruck.

“He sings this song as a lament that he can’t have her,” says Shen. “It’s a very gorgeous song full of nature imagery. Some of the lines are so stunning, like, ‘the sun caresses you too lovingly,’ and ‘your sighs pass your lips too beautifully’—part of the reason I like this song is the intense imagery and emotional value.”

To prepare, Shen wrote essays on the history of the song, the composer, and the poem Psyche is based on, all to help her get into character. “You have to understand what your character wants, and how to portray that through your actions and words,” says Shen. With songs like Psyche that are in a foreign language, Shen also researches the meaning behind each word and line.

An expert in languages and pronunciation, Cano “went through the song word-by-word with me: ‘this is how you pronounce this certain word,’ ‘make an ‘O’ motion with your lips’ type of thing,” said Shen. “That was amazing—I saw Mr. Cano four- or five-times last semester. I’d go into Harman [Auditorium] and practice being on stage.”

She knew the extra work paid off when after a recent talent show at SHP performing Psyche, a peer who is originally from France came up to Shen to compliment her pronunciation.

With a passion for STEM, Shen has also been influenced by another favorite—SHP science teacher Chris LaBonte. “As a student, occasionally I doubt my abilities. Mr. LaBonte was always there for me. He taught me to trust in myself and my capabilities. He devotes so much time and energy to the students—he will readily sacrifice after-school time or any free time just to help out.”

Last year, Shen synthesized her three passions: singing, writing, and STEM in an essay titled “From Babbling to Birdsong: What Finches Can Teach Us About Vocal Learning,” which was one of just 11 winning essays in The New York Times’ The Learning Network’s STEM Writing Contest.

Whether she pursues performing arts or STEM in college, Shen is sure of one thing: singing will always be part of her life.

The sentiment is echoed by Veronica Mendoza, who first inspired Shen. Now a second year MBA student at the University of Notre Dame, Mendoza still finds time to sing, having just performed a song-and-dance number in a school talent show. The pair reminisced about their time rehearsing together in the school play and connected over listening to each other’s recent performances.

“I’m really flattered that Beauty and the Beast was such a pivotal moment in Kelly’s musical career,” says Mendoza. “One of my favorite experiences with the SHS drama department was the ability to work with students across all grades. Watching Kelly perform on stage at Carnegie Hall is such a surreal moment for me—you never realize how much you can impact someone’s life at any point in time.”