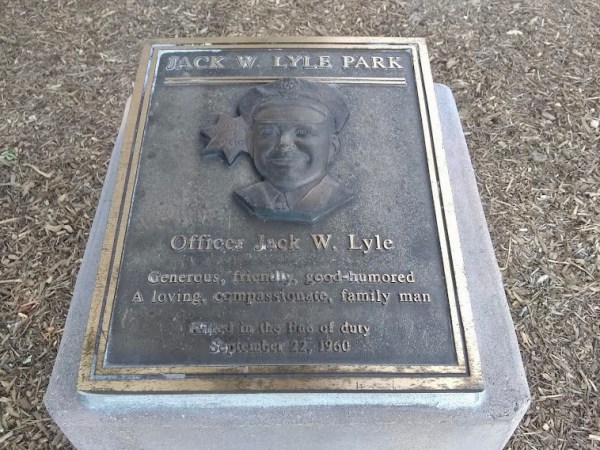 Craig Olson, who is Norma Lyle’s son-in-law, wrote a note to the Menlo Park City Council members saying how much it meant to her that the plaque for slain Menlo Park police officer Jack Lyle has returned to Jack W. Lyle Memorial Park on Middle Avenue in Menlo Park.

“It broke her heart to see it missing when it was vandalized some time ago…She leaves her house very seldom these days, so this week, when we discovered it had been replaced, we took a picture of it so she could see it and know that her husband, who gave his life for Menlo Park, is still honored and remembered.”

Jack Lyle is the only police officer the city of Menlo Park has lost in the line of duty. He was shot and killed September 22, 1960, by Roy Henry “Hook” Lane Jr., whom Officer Lyle spotted and cornered in a stolen car in Draeger’s parking lot. Lane opened fire and in the ensuring gun battle Officer Lyle was killed. Lane was executed for the murder in 1962. A detailed account of the incident is on the Menlo Park Police Officer’s Association website.

Reports Menlo Park city employee Lisa Atwood: “The city worked with the police department, Jack’s family and Jim Lewis to determine the best approach to prevent vandalism. This March, the city remounted the plaque on concrete base as a first step and are happy to report that the new mount is vandal resistant and cannot be knocked off. In the next month, the city is going to frame the top mount by repurposing the existing remaining pieces of marble so it will closely resemble the look of the original mount.”