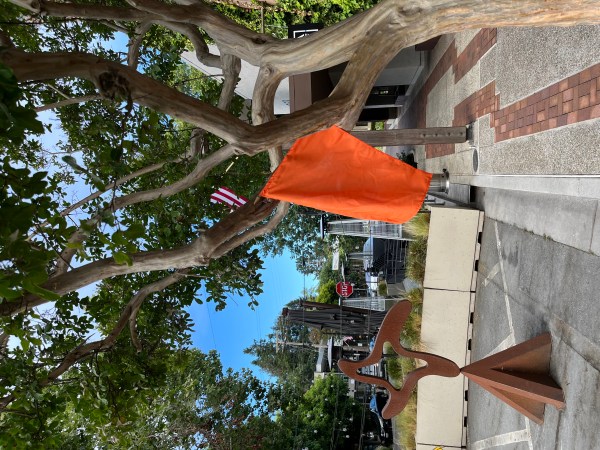 Art Ventures owner Kate Powers has an orange flag placed outside the gallery, and she emailed to remind fellow residents that it’s “wear orange weekend’.

“With gun violence devastating our communities, we’re going to show we won’t stop working to end this crisis. We should not have to live in fear that gunfire can ring out at any moment, whether it’s at an elementary school in Uvalde, a supermarket in Buffalo, a front porch in Philadelphia, a medical office in Tulsa, or graduations across the country. We deserve more

“Wear Orange started eight years ago to honor the life of Hadiya Pendleton, a 15-year-old girl who was shot and killed in a Chicago park less than a week after performing at President Obama’s second inauguration. Since then, it’s become a national movement of people coming together to demand a future free from gun violence.

“This year, action to end gun violence has never been more urgent. We cannot wait for more lives to be lost, for more communities to be forever changed by devastating acts of violence. Supporters of gun safety are more engaged in activism than ever — it’s time to show our leaders that enough is enough.”