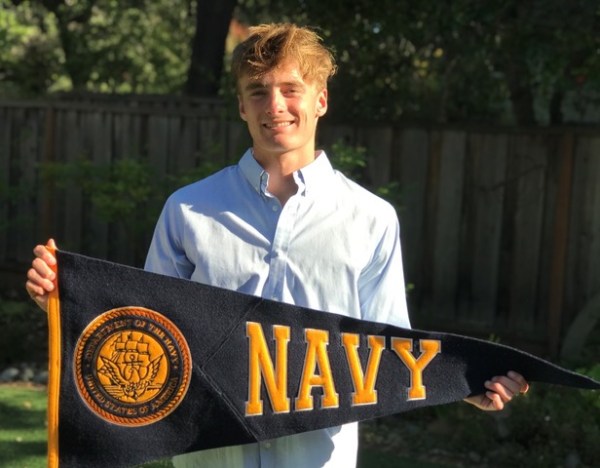 “I am very fortunate and feel grateful to have been accepted into the U.S. Naval Academy,” said Jack, who lives in Menlo Park. “I was one of four in my graduating class from Bellarmine that was accepted. This is an honor that I don’t take for granted.”

Jack was also named a National Merit Commended Scholar and awarded the California Interscholastic Federation Scholar-Athlete of the Year.

Jack first became interested in the Academy when he was a student at St. Raymond School in Menlo Park. Two of his St. Raymond teachers, Mr. Colt and Mr. Sullivan both served in the military. They introduced him to the different service branches, their respective educational institutions, and how these institutions prepare individuals to eventually become officers and lifelong leaders.

As Jack’s interest in attending the Academy grew during high school, he continued to leverage his St. Raymond relationship with Mr. Sullivan to learn more about what it was like to serve and pursue this path.

“I have so many fond memories from my years at St. Raymond, but I must say, the Academic Decathlon was my favorite experience. There were about 10-15 kids who studied year-round in many different subject areas, and we all worked really close together and grew to know each other well,” said Jack. “I am looking forward to a similar experience at the US Naval Academy — a close family, in a close environment, working together to accomplish our goals.”

Jack reports to Annapolis in late June for basic training and is leaning toward majoring in Mechanical Engineering.