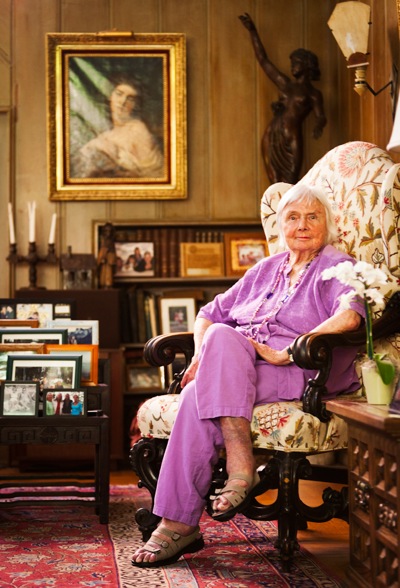 Leonore Rooney Daschbach, a longtime resident of Atherton, passed away peacefully at her home on June 24, 2022. She was a loving wife to her husband of 59 years, Howard M. Daschbach, Jr, (who passed away in 2012) and loving mother of six, grandmother of 18, and great grandmother of 16. Although an only child herself, Leonore will be remembered as the matriarch of her large family and all their friends.

Leonore, a fourth generation Californian, was born to Theodore and Lillian Rooney, on June 11, 1929, in San Francisco. At the age of five, her family moved to Atherton, to the home that Leonore lived in until her death. Her family believes that at the time of her death she was the longest living resident of Atherton. Leonore lived in her home on Winchester Drive for 87 years.

Leonore met Howard at the Neuman Club on the Stanford campus in the fall of 1952, and the two were married at the Carmel Mission on February 5, 1953. Leonore will be missed by her children LeeLee Cusenza (Steve), Rooney Daschbach (Claire), Lisa Fuerst (Rory), Laura Pitchford (Mark), and Mark Daschbach (Liz). Her youngest child, Michele Fast, passed away in 2011. She will also be missed by her 18 grandchildren and their spouses, Siena, Michael (Shane), Marisa (Tyler), Tave, Holly, Eric (Roxy), Leah (Todd), Rory (Lindsay), Brady (Kendall), Connor, Trevor, Doyle, Rooney, Sarah, Andrew, Patrick (Yaneth), Laura (Kyle) and Lisa. And her 16 great grandchildren Hailey, Jasper, Cleo, Sebastian, Ayla, Reese, Vance, Ward, Levi, Emme, Leo, Jaime, Tatum, Cody, Florence, and Warren. She will be missed by many friends as well.

Life for Leonore centered on her family and her family home in Atherton. She loved horses, dogs, playing tennis and loading her kids and their friends into the family station wagon for spontaneous adventures. She especially loved her anniversary trips to Hana Maui with Howard and her annual family trips with her lifelong friend, Jane Rothchild Turner, and her family. The Turner/Daschbach families have traveled together annually for over 60 years.

In earlier days, Leonore was active as a docent at Filoli, and as a member of the St. Raymond Mother’s Club, the Children of Mary, the Peninsula Volunteers, and the Menlo Circus Club. She was also a walking encyclopedia of the San Francisco Peninsula history.

The family wishes to thank Betty and Lose, her longtime care givers and Kris, Lole and Nani for caring for her in her last days.

A private family mass will be celebrated for Leonore at her beloved Convent of the Sacred Heart followed by the burial at Holy Cross Cemetery in Menlo Park.

Dear Laura, Mark and family,
Sincere condolences on the passing of Leonore, who although I didn’t know personally, I know was an incredible lady.
God bless you all at this time and may Her beautiful soul rest peacefully in Heaven.