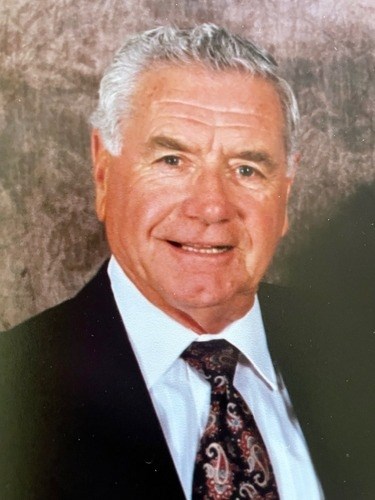 Guido Budelli — beloved patriarch, father, grandfather, and great-grandfather — passed away peacefully on July 17th at his Menlo Park home surrounded by his loving family. A Memorial Mass in celebration of his life will be held on Thursday, August 4th, at 11:00 at St. Denis Church, 2250 Avy Ave, Menlo Park.

Born in Alameda on October 30, 1923 and raised in Menlo Park, Guido graduated from St. Joseph Elementary School and Sequoia High School. He enlisted in the U.S. Navy and completed his basic training in Farragut, Idaho, serving four years at sea as a Machinist Mate First Class on the USS Teton stationed in the Asiatic-Pacific Area & Okinawa, Japan.

Guido met the love of his life, Florence Camporelli, at a mutual family friend’s home in Menlo Park. They married on June 16, 1946 at St. Theresa Catholic Church in San Francisco. They moved to Menlo Park in 1951, where they raised their family and were very involved at St. Raymond Catholic Church and School.

Their second home in La Selva Beach was always a fun getaway for the whole family.
Guido’s career took him to Freeman-Sondgroth Paving Company and BFI Waste management Company among others.

During this time, he was heavily involved in fast pitch softball travelling from Sacramento to Fresno, playing into his 40’s and making lifelong friends.

Guido was a board member of the Italian-American Social Club of Menlo Park, the Amici Club, and the Italian Catholic Federation of Menlo Park. He also was a Past President of EMSA Equipment Maintenance Supervisor Association.

Guido enjoyed golf and was the family’s “go-to” handyman. There wasn’t anything Guido couldn’t fix; no need to call in the professionals, we had Guido! A vocal fan at every one of his grandkids sporting events, Guido rarely missed a chance to support his family.

A special thank you to Malia “Tita” Ruocco, for being Guido’s dedicated caregiver for the past five years. Tita will always be an honorary member of our family.

In lieu of flowers please honor his memory with donations to St. Jude Children’s Research Hospital (501 St. Jude Place, Memphis, TN 38105, or www.stjude.org) or to a charity of your choice.

It was a honor and a privilege to know this wonderful man. Always a gentleman and a man with a infectious personality. He leaves a beautiful legacy behind and will be deeply missed.