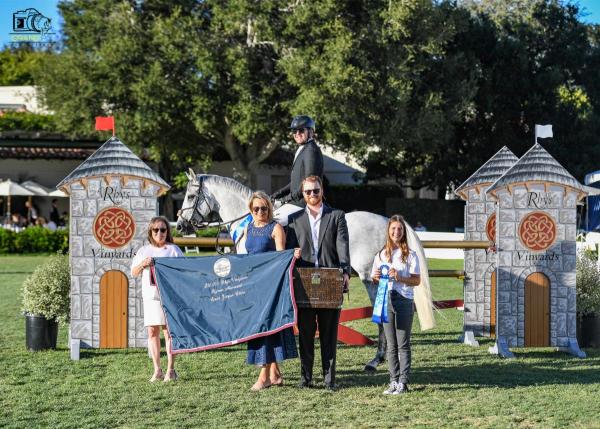 Eleven riders put on a show yesterday evening in the Grass Jumper Field, competing for the win in the $10,000 Rhys Vineyards Ryman Memorial 1.30m at the Menlo Charity Horse Show.  Dakota Mower riding Charmeur Des Terdrix Z emerged victorious with a quick time of 64.961. The pair brought home the blue in the $2,000 Windy Hill Equestrian in Memory of Larry Mayfield class earlier this week. 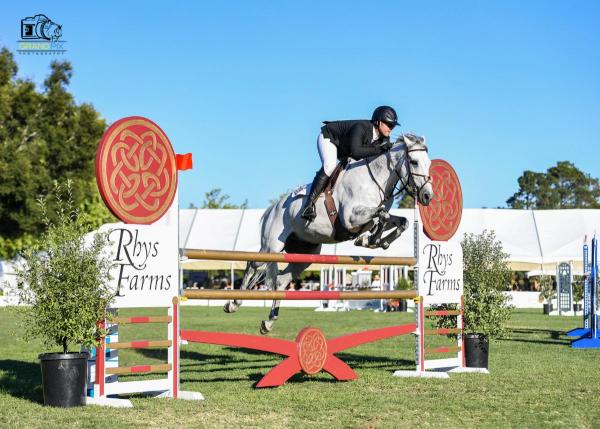 “He’s been on fire all week, he felt totally focused. I feel like he settled into the crowd a little bit. He was just ready to go.” Mower continued, “The atmosphere was really awesome tonight. The crowd was so involved, and it was a really good course that Alan Wade built. It gave the rider lots of options; where you could turn, leave out strides, and to see how fast you could go”.

The 11-year-old gelding, owned by Mia Dare Randall, is a new addition to the Windy Hill team where Dakota currently resides as Head Trainer. “When Laura Gerst (Windy Hill’s owner) found him in Europe, she called and told me: ‘I found a winner’. She was right!” Dakota exclaimed.

The Menlo Charity Horse Show, a 501 (c) (3) organization, was honored with the designation as a USEF Heritage Competition in 2012. Recognized as one of the finest equestrian events in the United States, Menlo is unique in that its origin and legacy is one of philanthropy. Its  current charitable partner, Vista Center for the Blind and Visually Impaired (Vista), was founded in 1936 and is the premier resource for individuals with vision loss in San Mateo, Santa Clara, San Benito and Santa Cruz Counties. During its partnership, Menlo has raised over six million dollars for Vista Center.