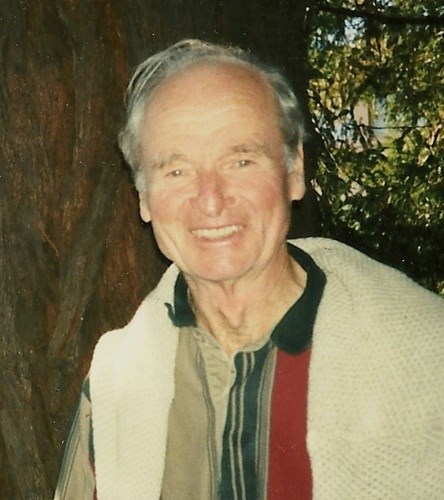 Bob left a legacy for his family, friends and the nation. He was a creative thinker, with tireless energy and an unmatched enthusiasm. He had a dogged determination to make a difference in whatever project he undertook. He was thoughtful, generous and loyal to his many friends.

Always upbeat and happy, Bob was a perfect gentleman in every way. He was an extreme optimist. As an avid golfer, he “knew” that his “best golf round” was just ahead. Often a mentor, always an example, Bob expected the best from everyone. His passions were his sweetheart, Carol, who he called “The Madam,” his family, the ocean, hiking, writing, Navy and Stanford sports, but most importantly his friends.

Bob loved people and they loved him back. He never forgot a name. Countless people credit Bob as their mentor and inspiration. His quick smile, infectious laugh and strong values of honesty, loyalty and generosity were embodied in a person who saw the best in people, regardless of their background.

One of his greatest pleasures was talking with the kindergarten children from the local elementary school about how to live a long and useful life. They loved it when “Mr. Williams” visited their school and Bob beamed with happiness when he realized he was able to help them understand the importance of gratitude, love of country, and other practices he encouraged them to adopt. Of all his many accomplishments in life, he felt that this experience with these youngsters had the most profound impact on him because he had helped shape their very futures.

He grew up in Sausalito where he was a proud Eagle Scout and an American swimming record holder. He graduated from the United States Naval Academy in 1944. While a Midshipman, he had a rare “double” — holding the highest appointive rank of Brigade Commander and the highest elective office of Class President every year. A two sport varsity athlete, he received the much coveted Class of 1897 Leadership Sword.

During WWII, Bob served four campaigns as a shipboard officer in the Western Pacific. After the war he became a Navy carrier pilot. In 1953 he resigned from the Navy and entered the life insurance business becoming one of the most respected and publicized international life insurance executives of his era.

As President of his professional life insurance association, the American Society of Chartered Life Underwriters, Bob is remembered for having strengthened the industry’s professional Code of Ethics.

Bob loved the Boy Scouts and took great pride in having been the recipient of the “Distinguished Eagle Scout Award,” the Eagle Scout Association’s highest honor.

Bob made many innovative contributions to the Naval Academy. He was a USNA Foundation Trustee for over 40 years and many of his ideas were accepted by the Academy. Additionally, he procured a NASA Moon Rock for the USNA Museum. Bob crewed while at the Academy and last year he was deeply moved when the Navy named a rowing shell after him. With water from the Severn River, he christened the Robert Beresford Williams Class of ’45 shell with tears running down his cheeks.

All of Bob’s family and his friends thank him for all he has done to enrich their lives. Those who mourn his passing include:
Carol Mayer Marshall, his “sweetheart” and wife; his daughters Cara Taylor (Paul) and Betsey Williams; his grandsons Donald Taylor (Nancy) and Steve Taylor; his great-granddaughters Emma and Abby Taylor; his stepdaughter Parri Marshall (David); his step-granddaughters Ariel Waldman (Matt Biddulph) and Zahra Waldman; his nephews Ken Williams (Kathy), Michael Williams (Mimi), Steve Williams (Stephanie), Robert Beresford Williams (Mary Beth), his cousins Cinda Ely and Karen Sivley (John) and his dear friends: his Scottish family, the Symes, Jose Alvarez, Maggie Wilde, Dr. Jeff Croke, Judy Tuipalotu, and Tim Larson.

A memorial service is being planned for a later date.