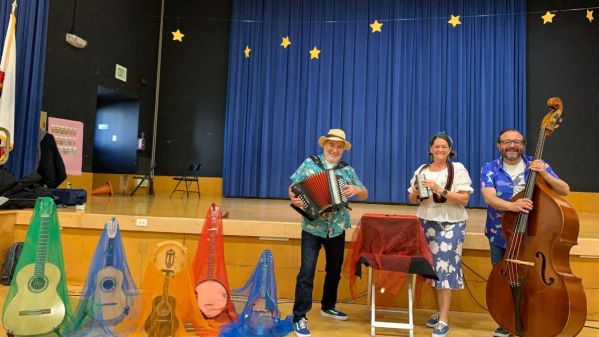 Everything is possible with magic words, and the help of the wise creatures of the sea. Sing and dance with the music of several Latin American countries, with their various rhythms, languages and different kinds of guitars on Saturday, October 1, from 11:15 am to 12:15 pm at the Belle Haven branch of the Menlo Park Library  (413 Ivy Dr.)

Arwen Lawrence and Jorge Liceaga of Cascada de Flores are firmly committed to music and cultural education. They present a bilingual music and dance program for children in schools, libraries and theaters. They have performed in over a thousand western schools and libraries, reaching over 500,000 children. Recently, the dúo brought their musical story to la Mixtecan hills of Oaxaca, Mexico. They present ongoing bilingual classes and special workshops for children and families focused on traditional Latin American folk songs and Mexican traditional music and dance.