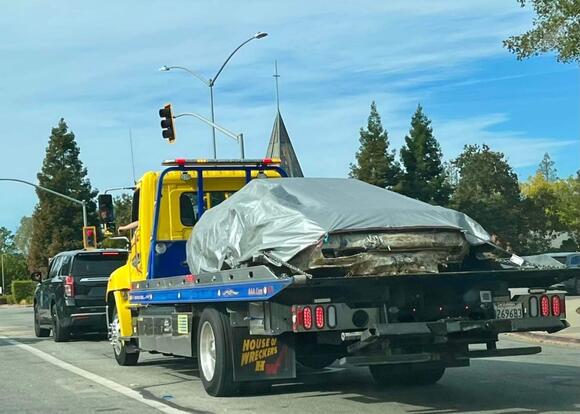 “On Saturday, October 22, the vehicle was removed from the property by tow truck and was transported to the San Mateo County Crime Lab for further inspection and processing. After the car was removed, a cadaver dog was brought back to the scene. The cadaver dog again made notification of possible human remains. Further excavation of the scene did not reveal the presence of any human remains.

“On Sunday, October 23, ground penetrating radar was used to examine the scene. This examination did not reveal anything unusual or suspicious at the scene, and no human remains were located. This concluded our on-scene investigation.

‘The vehicle was possibly buried sometime in the 1990’s and was buried approximately 4 – 5 feet into the ground. There were unused bags of concrete throughout the vehicle. The vehicle is a Mercedes Benz and was reported as stolen to the Palo Alto Police Department in September of 1992. The possible owner of the vehicle is believed to be deceased. We are waiting for DMV records that are being retrieved in the DMV archives.

“The vehicle was buried before the current homeowner occupied the home.

“The motive and circumstances surrounding this incident continue to be under investigation.

“No additional information is available at this time.”