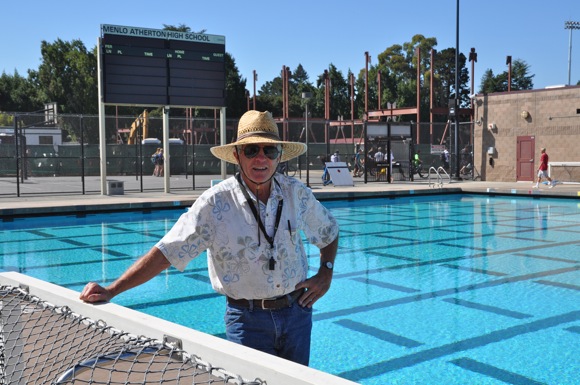 Retired Stanford University water polo coach Dante Dettamanti, who also coached  at Menlo-Atherton High School and Sacred Heart Prep, was killed while bicycling  on Cañada Road this past Tuesday. According to the California Highway Patrol, Dettamanti crashed into a County Public Works Department street sweeper about a mile south of Highway 92. He was 80 years old.

In his 25 years at Stanford (1977-2001), Dettamanti led the Cardinal to eight NCAA championships, advancing to the NCAA title game 14 times. One of five head coaches in Stanford Athletics history to capture at least eight national titles, Dettamanti became only the second collegiate coach in NCAA history to record over 600 career wins and the only collegiate coach to win NCAA championships in four different decades.

Named national coach of the year six times and league coach of the year on 10 occasions, Dettamanti also had great success on the international stage, coaching the USA World University Games teams to gold and silver medals in 1979 and 1981, the highest finish ever for a USA national team. Over a dozen of his former players went on to achieve success at the Olympics, including Stanford greats Jody Campbell, Wolf Wigo and Tony Azevedo.

Prior to arriving at Stanford, Dettamanti coached at UC Santa Barbara and Occidental College and served as a graduate assistant at UCLA. He earned a degree in engineering from UC Davis and earned his master’s degree in exercise physiology from UCLA after a stint in the US Army.

An impressive athlete in his own right, Dettamanti was one of the original pioneers in the sport of triathlon, placing sixth in the prestigious Hawaii Ironman in 1981.

In retirement, the Woodside resident became interested in winemaking. He told Bob Murphy in 2004: “When I retired from Stanford three years ago, I decided I wanted to become more involved in growing grapes and making wine. I was doing it actually my last eight or nine years at Stanford as a part-time thing just as a hobby. Now I’m into it, and it keeps me busy, keeps me occupied, and I love it. I’m outdoors amongst the trees and beautiful Santa Cruz Mountains.”

This is tragic and so sad to hear. Dante was a great coach and just an overall fun and happy person to be around. Rest in peace, coach!

Huge inspiration & friend during my 2 years at UCSB. Very lucky to have had him in my life, as we’re all my fellow Gauchos.
R.I.P. Darby Dog, ALOHA OE

Very Anguished, to learn of this sad story. What a “Truly Authentic” Coach who spent a lifetime playing, coaching, studying, doing camps in, with the “Sport” of Water Polo. Of the best of Ambassadors for the sport. Dante was always concerned for the “integrity” of the sport, and the way the game was to be played. His counter offenses, (counter defense too) were second to none. I so enjoyed studying his teams with the great goalie from Randy Burgess’s Coronado Team, “Jack Bowen Number 1”, (Among the best goalies ever), and “Wolf Wigo”, number 14, Bronx Team, (among the best Forward-Attackers ever). This when I was a swim grad. asst. coach at Stanford & studied NCAA Reforms for PhD. I so enjoyed working Dante’s summer water polo camps, & took many notes. I embraced Dante’s philosophies when I served as the head coach at L.M.U.& beyond, & served on NCAA Committees with him. Dante was a “wonderful”, and a “refreshingly authentic” person & a studied water polo coach “second to none!!” “Grateful”, at “Thanksgiving”, for his positive influence on me…

“Feeling Anguished”; Dante had “Integrity”, & “Refreshing Authenticity”, of which he brought to NCAA & USA Water Polo. I embraced Dante’s philosophies on, and in the sport, serving as a Grad. Asst., at Stanford, while working on a PhD on The Knight Commission & NCAA Reforms, & worked in his summer water polo camps. What excellence that will “never be matched on the deck” everyday with Dante, Richard Quick & Skip Kenney… Also student athletes, NCAA Champs, American & World Record Holders & Olympians; Jack Bowen, Wolf Wigo, Pablo Morales, Jeff Rouse, Summer Sanders, Jenny Thompson, and all. What a “Wonderful & “Cherished” “Place in Time”, “Never to be Equaled.” “Simply The Best Of Times.” -David Kintas

I remember him as a handsome all american guy in Santa Maria. Always around water sports, healthy and happy. May he rest in peace. Condolences to his loved ones! Virginia Perry Souza