The problem with, and solution to, too much turkey 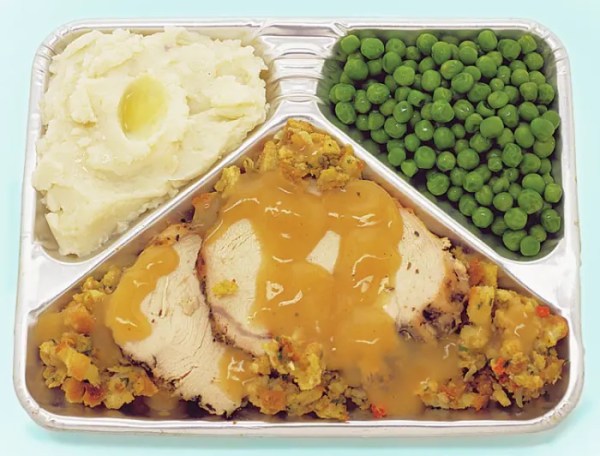 It’s almost Thanksgiving, which means that if you’re in the United States, there are turkeys for sale all over the place. Turkey is the hallmark staple of a Thanksgiving feast, after all (even if it’s overrated). And for the poultry industry, that means the lead-up to Thanksgiving is one of the busiest and most complicated times of the year. Logistically, it’s not trivial to get a lot of frozen turkeys from your factory farms to stores across the nation, after all.

And about 70 years ago, it was even more difficult. Without computers, estimating the number of turkeys you needed to provide was difficult at best. Too few turkeys meant meager revenue during the most important time of the year, and too many meant you lost money from unsold meat that wasn’t easy to preserve — that tech has also evolved significantly over the last few generations. And in 1953, someone at the Swanson company made that latter mistake. The company had overestimated the number of Thanksgiving turkeys that it would be able to sell.

By about half a million pounds.

That’s a big problem, to say the least. Not a company-breaker, but definitely the equivalent of a couple of a hundred thousand dollars of waste, if Swanson couldn’t figure out what to do with the meat. And time wasn’t on Swanson’s side. As History explains, “to keep them from thawing and going bad, Swanson placed the frozen fowl in ten refrigerated railway cars. And since the cars’ refrigeration only worked when the vehicles were moving, the company shuttled the trains back and forth between its Nebraska headquarters and the East coast while executives desperately brainstormed solutions.”

Swanson had already been pioneers when it came to frozen foods; a few years prior, the company had made a name for itself by selling pre-cooked chicken and turkey pot pies, which busy parents could put into the oven for 30-45 minutes without any need to prepare. The 260 tons of frozen turkey on the rail cars couldn’t be processed into pot pies quickly enough, though, so Swanson needed another solution. And they found one: TV dinners. Smithsonian explains:

Swanson salesman Gerry Thomas, a visionary inspired by the trays of pre-prepared food served on airlines. Ordering 5,000 aluminum trays, concocting a straightforward meal of turkey with corn-bread dressing and gravy, peas and sweet potatoes (both topped with a pat of butter), and recruiting an assembly line of women with spatulas and ice-cream scoops, Thomas and Swanson launched the TV dinner at a price of 98 cents (those are Eisenhower-era cents, of course).

There are others who take credit for the idea as well; per the Library of Congress, executives at Swanson claim that their leadership, Gilbert and Clarke Swanson, also claim to have come up with the concept. But either way, the idea, at least as Swanson was concerned, came from the need to use up these excess turkeys.

And as history would show, it worked. Swanson put significant weight behind a marketing campaign, espousing the convenience of a like-home-cooked meal that you could heat and then eat while watching one of your favorite TV shows. Per Smithsonian, “in the first full year of production, 1954, ten million turkey dinners were sold” — a lot more than were stuck on those refrigerated train cars.

Author Dan Lewis oversees the Know I Now website; he can be supported through Patreon.