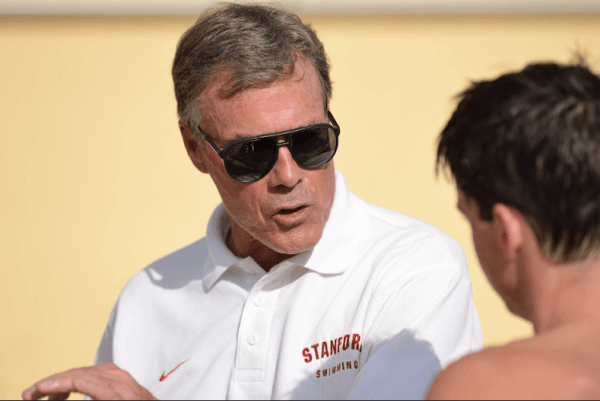 Editor’s note: Allen “Skip” Kenney, who led Stanford’s men to seven NCAA swimming championships during 33 seasons (1979-2012) as head coach, died Monday morning of complications from Alzheimer’s, according to his stepdaughter, Cara Douglas. He was 79.

The service for Kenney, who also led the 1996 men’s Olympic swimming team, will be 11:00 am Tuesday, Dec. 6, at Belmont Memorial Park in Fresno. You can read his obituary online.

What follows is a remembrance from one of his swimmers, Kurt Kroesche, Stanford class of ’89.

My first introduction to Skip Kenney was delivered in the mail. Framed front and center on the cover of the May 1985 edition of Swimming World Magazine, he stood freshly doused from a post-victory dunking, fist raised while his swimmers screamed in triumph. They all seemed to erupt out of the picture, arms raised, drunk on some kind of glorious, impossible achievement. I saved that cover, wanting someday to drink from their happy, privileged cup.

Skip was my college swim coach for three glorious seasons, a distant guide who managed, cajoled, and barked at 20+ men in a pool. He made us swim fast, but that’s no great thing. Skip somehow made a group of bookish, sometimes foolish, young men with egos the size of Bolivia into a real team. Somehow, he made us all care about each other.

The remarkable thing about Skip was that he recruited remarkable people. He knew he didn’t have to lead alone. It started with signing the Godfather, Dave Bottom, and all sorts of quality humans began to roll in. Skip knew better than to make all the recruiting calls. He left it to us; we recruited each other.

Soon the superstars arrived — Moffet, Pablo, and Kostoff (to name a few from my era), but Skip knew he needed more. He made sure we had another type of leader. Sam McAdam and Mike Reynolds provided the moral center of those first championship years, and they could sometimes say more in a smile, a nod, or an improvised song than any one of Skip’s locker room speeches.

Of course, I remember my recruiting class the most. Skip and his team convinced us to come. I’m quite sure many of us would have found greater individual glory at other schools, but I guess we wanted to be a part of something bigger, grander. What other team produced a cheer that required you to spell out 30 letters in a row? We were Shawn Bonsell, Jeff Garr, Bob Gavin, Rob Genc, Drew Hayden, John Hodge, Kevin Jacques, Jay Mortenson, Rich Roll, and Dave Schraven.

The class of ’89 will always be my team, no matter how long or short we stayed together. Despite his many strengths and his many flaws, Skip brought us to each other. It’s true, some of us suffered under his direction and judgment, but he also gifted me with teammates who have covered me in joy and gratefulness for the past 37 years.

I have one final memory of Skip. At the end of my junior season, I’d hit rock bottom. I won’t go into the details, but I knew I had to quit school, quit swimming, quit everything. I can’t say Skip mastered any kind of sensitivity training while on the pool deck, but he sensed my internal struggle immediately.

So one morning he invited me to a breakfast at Stickney’s, ordered his pancakes, and just listened to me. That hard-ass ex-Marine sniper just sat there and listened. When our meal had ended and I had nothing left to say, he wished me well. It was a traveling mercy. I felt a little more free, maybe even blessed. All I know was that he was good to me then and I’ll always be thankful.