Ladera: A bit of Menlo, a bit of Portola Valley 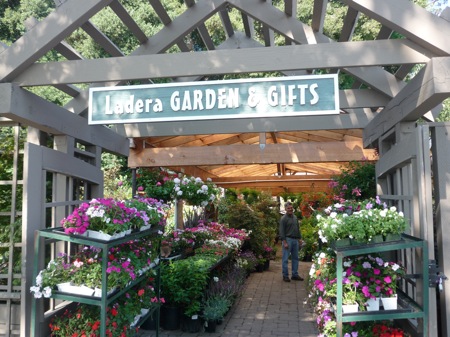 Long time Menlo residents probably think of the Ladera neighborhood and the Ladera Country Shopper as part of Menlo Park. Never literally part of Menlo – it’s always been unincorporated county of San Mateo – but Menlo by name. That changed some years ago, according Juan Navarro (pictured) – who’s owned Ladera Garden and Gifts along with wife, Mercedes for 29 years – when the neighborhood’s zip code changed from 94025 (Menlo Park) to 94028 (Portola Valley). Ironically, many of the residential addresses that go up the hill from the shopping area retain the 94025 zip.

Whatever its address, Ladera Country Shopper has been serving the needs of both communities since the late 50s, making it a mainstay. The Menlo Almanac provides a good review of its history as well as the renovations that began in 2005 and were completed in 2006, including an arcade between Bianchini’s Market, Ladera Garden and Mike’s Cafe, making it a great spot to stop and hang out, particularly during the long months of warm weather than extend from spring through fall.