Round Table: 50 years of fresh pizza 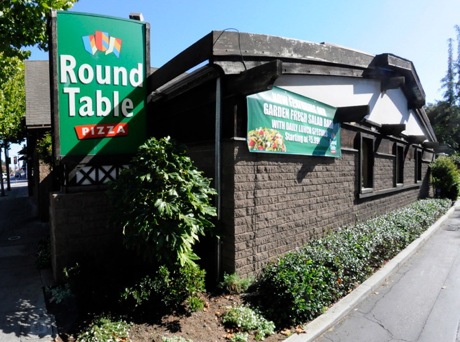 It’s a safe bet that most people wouldn’t be able to answer the trivia question “where was the first Round Table Pizza located?” An equal number would be surprised to learn it still exists.

Like the more famous franchise McDonalds, which opened on historic Route 66 in San Bernardino in 1948, William R. Larson opened the first Round Table Pizza restaurant in 1959 on another noted route, the El Camino Real in Menlo Park.

According to the company’s website:  “As far as the shields go, the original concept of ‘Round Table’ was to signify a gathering place – it had nothing to do with King Arthur or the Knights of the Round Table. One day, in about 1961, a friend of Mr. Larsons was eating pizza in the restaurant and started drawing the characters from King Arthur’s court, all eating pizza. Mr. Larson was so excited he adopted the King Arthur theme and started making the restaurants look like English castles.The shields were added to the logo  about 1970. There are actually three shields and, believe it or not, they symbolize the letters ‘F’, ‘U’, ‘N’, spelling FUN! Most people don’t see that when they look at the shields, but that’s the true story!”

There are now around 500 company-owned and franchised Round Table Pizza restaurants, mostly in the western United States. And unlike the original McDonald’s which is now the site of a museum, the original Round Table is still selling pizza at 1225 El Camino Real – 50 years after first opening.

Leave it to YOU, Trixie! Sheesh!
What about Mtn. Mikes? And a Clark’s burger w/a Rootbeer float!
Foster’s Freeze? Oh…and The original A&W on Castro? The flavor still rings on my lips! And I just cant get enough day-old rootbeer in a megaphone!
Then there was Woody’s…but I ramble on. Come on SusieQ…jump in here!

Don’t forget Lindas Burgers at El Comino and Esquala in Mt. View Ca. They were the bomb. Then there is Pazzella’s on the El comino in Sunnyvale Ca. They opened in 1957 and still in buisnes, super Italian Food.

i worked at round table in the late 70’s in centerville cal. i loved the pizza then,now the pizza taste like dog crap people don’t know what good pizza is it all started to go down hill when the brick oven left the kitchen & no more corn meal on the crust,your managers don’t even know what good pizza is back then pizza bussiness was so busy there would be 4or5 people on make friday&saturday nights because the pizza was so good people were willing to wait for the best.i remember fresh ground beef and saugage&rath pepperoni.(bankruptcy)

I worked at a roundtable in the 90s. Don’t compare your wife’s cooking to roundtable. You are mad because you no longer work there and don’t have the employee discount. It’s sad you can’t afford quality food. You should have gone to school so you could afford the cost of living in the South bay. Enjoy you dog crap you
Eat at home

Ahh, I hate to say it but, Ernie?, Round Table Pizza isn’t the same as it was in the 1970’s, 80’s. I didn’t even work there but we ate there a lot to know and we discovered later that there was some sort of weird aftertaste to the Pizza and they didn’t put as much toppings. The pizzas were covered with mushrooms, olives, white onions, peppers and anchovies if you wanted them. It was all about the toppings, now it’s about paying extra for toppings and about the cheese and dough. The Olive oil is probably rancid too.

Round Table is legendary . . it should be a historic landmark in Menlo Park. Nothing is sacred anymore. The city council allowed the old Foster’s Freeze to close . . .irreplaceable and part of the city’s history! . . . the city allowed the Oasis to close too! . . .vote these bums out of office!

RTP is the most underrated and delicious pizza of all time period. A California specialty.