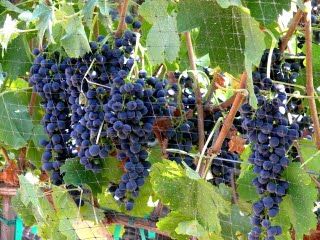 We know well that neighboring Atherton is home to a vineyard which has been producing Pinot Noir for some 10 years now, but the whisper that Menlo Park is home to a winery has set the InMenlo newsroom into a blur of activity.

Our ace agrarian beat reporters have already uncovered Menlo’s chicken ranchers, but  no one could think of where a winery, much less its vineyards could be located in 94025-land. True, the city of Menlo Park is 42% covered by San Francisco Bay, and given the proximity of Stanford’s genetic labs one could wonder if submarine grapes are secretly being grown just offshore. But, then again…

As we go to press, the InMenlo investigative staff is narrowing the search, but has yet to get anyone to go on the record. Breaking news soon, we hope.

Update: reminded of a mini vineyard (pictured above; photo from August 2007) in the University Park neighborhood.

Woodside Vineyards is being (has been?) purchased by an outfit called Autovino (http://www.auto-vino.org/) in Menlo Park. I believe that the winemaking facility is moving to Menlo. See http://reignofterroir.com/2009/03/19/bob-mullen-on-the-history-of-woodside-vineyards-and-the-scm-ava-pt2/ and http://www.woodsidevineyards.com/newsletter.pdf. Of course there are many home wine makers – my neighbor just crushed 3000 pounds of grapes.