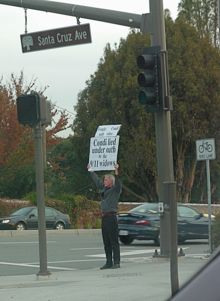 A lone protester was imploring drivers along Sand Hill Rd. and Santa Cruz Ave.  to “Google Condi under oath” during the morning commute. The Condi in question, we presume, is former Secretary of State Condoleezza Rice, who’s now a senior fellow at the Hoover Institution at Stanford. Rice is not having an easy go of it post office. Just last night she was greeted by about a hundred protesters while on a visit to the Twin Cities. While the protester in Menlo was raising questions about Rice’s testimony related to the attacks on 9/11, the protesters in Minnesota were calling attention to her alleged role in authorizing torture during the Bush administration.

UGHHHH!!!!! People need to get over this. Technically, waterboarding is NOT torture and the guys they did this too are scum bags anyway.

p.s. Is that Gary Bacon of “Learning Community” fame holding up the sign?

Waterboarding consists of immobilizing the victim on his or her back with the head inclined downwards, and then pouring water over the face and into the breathing passages, causing the captive to believe he or she is dying. Forced suffocation and water inhalation cause the subject to experience the sensation of drowning. Waterboarding is considered a form of torture by legal experts, politicians, war veterans, medical experts in the treatment of torture victims, intelligence officials military judges and human rights organizations.
In contrast to submerging the head face-forward in water, waterboarding precipitates an almost immediate gag reflex. While the technique does not inevitably cause lasting physical damage, it can cause extreme pain, dry drowning, damage to lungs, brain damage from oxygen deprivation, other physical injuries including broken bones due to struggling against restraints, lasting psychological damage or, if uninterrupted, death. Adverse physical consequences can start manifesting months after the event; psychological effects can last for years.

Quoted from Wikipedia article. See article at http://en.wikipedia.org/wiki/Waterboarding for citations supporting all facts.

If you believe everything you read everything on Wikipedia is fact, I have a bridge I would like to sell you.

Here is the Merriam-Webster definition:
Torture (n): the infliction of intense pain (as from burning, crushing, or wounding) to punish, coerce, or afford sadistic pleasure.

Do you think that anything printed on paper is fact? This particular Wikpedia article is supported quite well by many citations. And while I wouldn’t rely on a dictionary definition to prove a point, since you brought it up, it does seem clear that under this definition waterboarding is torture. In any case, whether or not waterboarding is torture depends on a definition of both terms. It’s a boring semantic argument. What is truly at issue here is whether it is morally acceptable and whether it is effective.

Well stated. I agree with the moral argument completely. In fact, that’s what my original post was targeting – the hypocrisy of people supporting war, but condemning “waterboarding.” And while I completely understand that there are many people out there who do indeed condemn both, it seems plain silly to be singling out this particular set of circumstances while we still have troops in Iraq and Afghanistan.