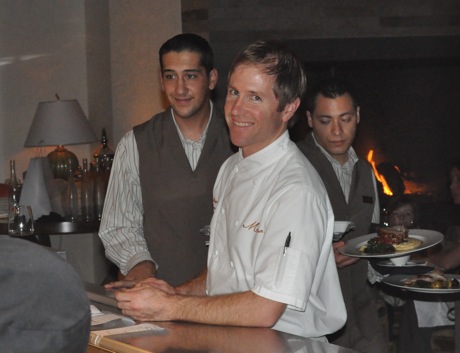 Make an Online Reservation (via OpenTable.com)!

Reserve this as a tip for next year – at least as long as Executive Chef Peter Randolph (pictured overseeing the kitchen and service) is at the helm. Madera – the restaurant at Rosewood Sand Hill, which opened in Menlo in April – is the place to have Thanksgiving dinner with a a more adventurous twist. It was bustling today, particularly from the more grown up hour of 5:00 pm on.

It was clear from the first course (shaved heirloom apple, celery heart and endive salad with manchego cheese and marcona almonds tossed with almond cream vinaigrette) that this was not the ordinary fourth Thursday in November meal. But it was the not-described-in-such-detail sides that really stood out, particularly the Brussel sprouts. Randolph visited with two InMenlo contributors to explain his secret of how a vegetable despised by so many could taste to good: “baked in apple cider.” Of course, the exact execution remains a secret.