Anyone else remember the life-size Nativity scene in Fremont Park? 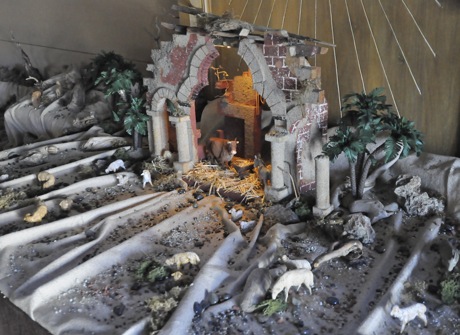 Many decades ago, there were two landmarks that reliably appeared in downtown Menlo Park to mark the holiday season.  A Santa house would be erected in the vacant lot next the camera store that was housed in the funny yellow building on Santa Cruz Ave. (Blanking of the name of that camera store, while Santa and his house are imprinted on this contributor’s brain.) Santa himself would hold forth during posted hours. This secular offering was balanced by a life-size Nativity scene in Fremont Park, placed in the corner where the stage now sits. Some quick research failed to reveal when both of these practices ended. Anyone out there know?

Today Menlo residents need to enter of one of the city’s churches to see a Nativity scene, which are dusted off and set up on this the first Sunday of Advent, the start of the year for liturgical churches that also marks the four weeks leading up to Christmas. Holy Trinity’s display (Mary, Joseph and Jesus don’t appear until Christmas Eve) takes up the whole back of the church. To view hundreds of Nativities, you’ll need to go to Palo Alto for the 22nd annual Christmas Creche Exhibit.

The holiday Santa Claus hut was next to the sidewalk in front of Elmo Hayden’s Menlo Camera shop [the former Rossi family* home site] and was there into the ’80s. Lou Ciardella was the Santa Clause so maybe someone from his family may recall when he stopped being Santa. He passed on not too long ago. And I, too, recall the live ‘Nativity’ at Fremont Park but unable to recall dates.
* the Rossi family home had a beautiful rose/geranium garden in the front with wrought iron fencing. The Rossi daughter’s were related to Rita Gado -the former president of the MP historical Assoc..