And the rain came, along with the wind 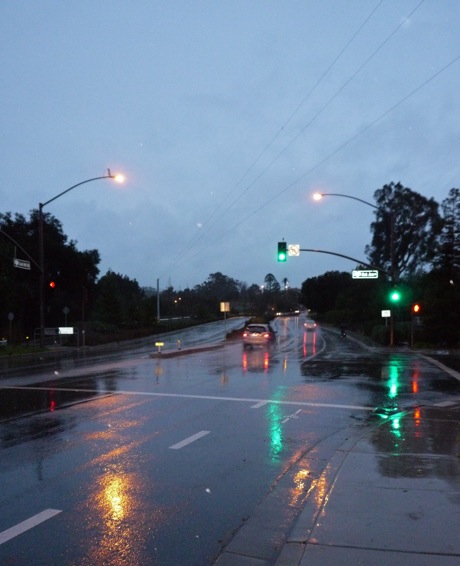 The rain that’s been predicted finally arrived in full today, after just some hints on Sunday. The holiday for many translated into a light commute on Sand Hill Road (pictured). But woe to the driver who was heading east on Santa Cruz Avenue late morning; as recounted in the Almanac News, the top of a redwood tree snapped off and crashed down on a car. Rainfall watcher Bill Russ recorded .75″ in his backyard gauge over the last 24 hours through 4:00 pm. The deluge is expected to continue through the week and may rival the ’97-’98 torrents, meaning the San Francisquito Creek watch has officially begun.

Photographs of Menlo Park in the rain are so delightful in part because rain is so rare. In other places locals probably take more delight in photos in the sunshine. So we’re constantly reminded how special this part of the world really is.