The deluge descends upon Menlo – latest rainfall and flooding updates! 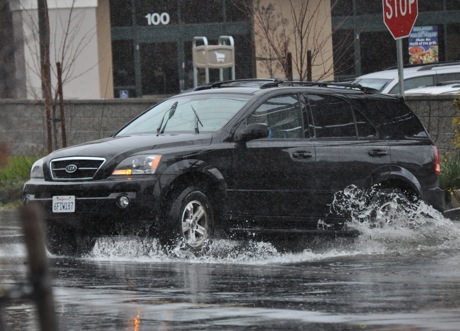 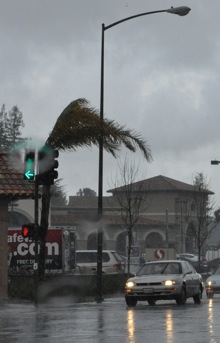 A mid-morning deluge swept the Peninsula, flooding streets (Middle Ave. is seen here) and bending trees with high winds, like the Palm pictured near the corner of Middle and El Camino.

There were reports of even deeper water racing over the sidewalks and lapping at shop doors near Valparaiso and El Camino.

The storm subsided shortly after 11:00 am, with the sun poking through the clouds.

Local rainfall watchdog Bill Russ checked in with InMenlo shortly after the latest storm broke:  “I checked my rain gauge. Good thing I have two as one was blown cockeyed. My total for this storm is
2.3″ bringing my year-to-date total [beginning July 1, 2009] to 10.9″. I know the heavy rains are a bother to many but I say ‘whoopee’!” 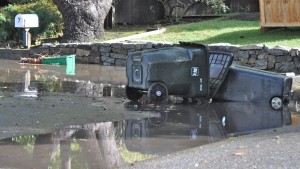 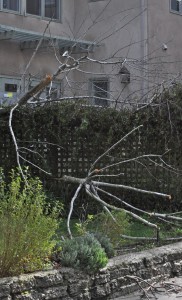 Photos taken shortly after the water had partially receded do indeed show Cotton Place scattered with errant bins, and the house on the Southwest corner of Cotton Place and Cotton Street had lost a tree to the sharply gusting winds.

Around 2 P.M., very dark clouds rolled in and thunder rattled windows, but the rain seemed to be holding off.

As of this morning just after the big rains passed through, and measuring since last weekend, the rain gauge contained 4.45″ of water.

The creek was raging, looks like it topped around 11:30. Watching the flow for about half an hour at El Camino bridge, I counted 26 green tennis balls, one volleyball, one basketball, and one wooden duck decoy.

I took advantage of the break in the weather to go for a jog at noon. On Creek, between El Camino and University, there was a giant tree (oak?) that had been torn out at root level and fell pretty much parallel to the street but nonetheless completely blocked the street. As far as I could see there was no damage to nearby houses or cars. City staff were on the scene.