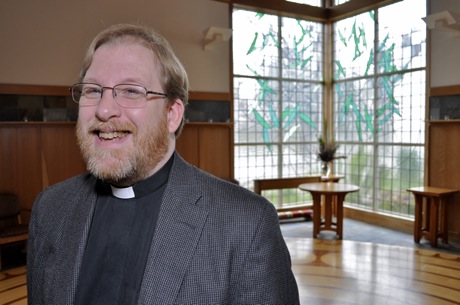 It wasn’t the fact that the Rev. Matthew Dutton-Gillett grew up a “preacher’s kid” that led him into the ministry. Rather it was “the sacred experience of the liturgy,” discovered while attending college, that prompted him to enroll at Episcopal Divinity School and seek ordination. Today, the  Menlo Park newcomer (he and his family arrived this past August) will by installed as the 18th rector of Holy Trinity Episcopal Church.

Not surprisingly, his chosen profession is not without its challenges in 2010. Explains Dutton-Gillett: “Faith communities are in a very interesting place, being challenged to make their traditions both sensible and credible to a culture where fewer people have any deep knowledge of those traditions – and often question whether communities of faith have anything to offer to them.  A community can respond to that challenge by developing a harder shell and holding on even more tightly to their traditions, or they can respond more creatively, by finding new ways to open up their traditions to new seekers.  It is this more creative response that I find interesting and exciting.  To me, part of that creative response is making space for people’s questions and explorations, rather than simply giving people ready-made answers.”

Dutton-Gillett, who spent the last 10 years in Knoxville, TN, as rector of St. Elizabeth’s, admits to being a bit surprised about his new hometown of Menlo Park: “It has the feel of a small town.  It has been some years since I lived in a large metropolitan area, and with that as my frame of reference, I expected that it would really feel like I was living in a large metropolitan area.  But Menlo Park really has preserved a kind of small town feel – and I like that.”