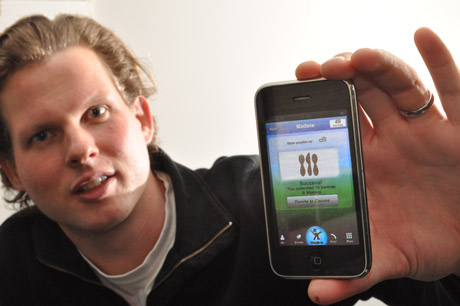 If you were braving the chilly streets of downtown Menlo Park in early December, you may have spied a bunch of people running around doing something – taking pictures? – with their cell phones. Their mission was the final development of a new mobile application – CauseWorld – that launched just before Christmas with the promise of  helping the world while shopping.

“We scoured Menlo Park, particularly Santa Cruz Avenue and Sharon Heights shopping area, during our testing phase,” said the company’s CEO and co-founder, Cyriac Roeding. “We walked from store to store, checking in at each.”

“Checking in” is what users of the mobile app do to earn “karma points.”

“You get 10 karma points when you walk into a store,” said Roeding. “As example,  one karma offsets two pounds of carbon emissions, so with 10 karmas, you offset 20 pounds through Carbonfund.org.”

No purchase is required; the donated karmas are currently underwritten by two sponsors, Citi and Kraft Foods. The app is available for the iPhone and Android phones.

“You know the notion of going shopping and feeling guilty?” said Roeding. “CauseWorld takes the guilt away and makes it a great day. Every time you walk into a store you are actually changing the world.”

After being developed, incubated and launched in Menlo Park, the company leaves its birth town today for larger digs in neighboring Palo Alto.