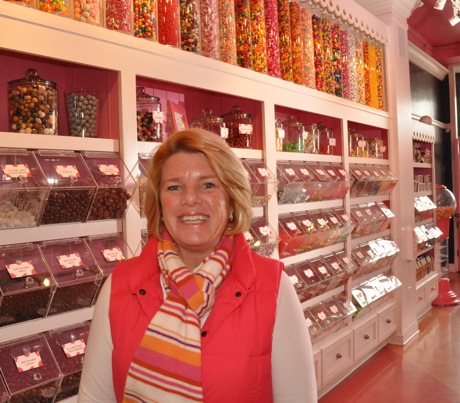 Given that she’s the owner of the Sugar Shack, it’s probably not surprising the Suzi Tinsley’s kids like candy. More surprising is that there are seven of them!

The retail location on Santa Cruz Avenue in downtown Menlo, which opened three years ago, is just one part of the business. Two Sugar Shack candy carts make their way to birthday parties, Bar/Bat Mitvahs and even weddings (for grown ups with sweet tooths). The space is also rented out for special events.

But it’s the hangout factor that gives the store it’s continuing buzz. “We’re the Starbucks of the middle school set,” says Tinsley. WiFi is available and the soda fountain gets packed after school. “I even spotted one older kid filling out his college applications.”

With Valentine’s Day just around the corner, the stores is brimming with a wide variety of red/pink/white candies. “We also have wonderful chocolate covered oreos, cupid corn, and cherry gummi bears which are all unique to the Sugar Shack,” says Suzi.