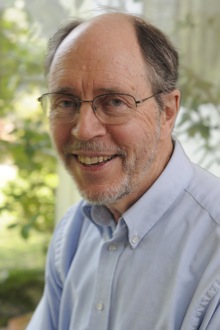 If anyone in Menlo Park meets the definition of polymath (a person of wide ranging interests), it’s likely to be West Menlo’s Dick Duda. With a PhD from MIT (in electrical engineering) Duda has served stints at SRI, Fairchild and Syntelligence investigating fields like artificial intelligence, neural networks and pattern recognition. Currently a visiting professor at UC Davis, Duda is also a Professor Emeritus at San Jose State and  a Fellow at a long list of academic societies. Most recently, he is busy investigating spatial sound  and can offer the visitor to his home office a very cool demo of headphones that “know” – and can track – a virtual sound source, thanks to a hardware and software hack.

Duda’s real passion, however, is the Silicon Valley chapter of the Nuclear Age Peace Foundation (NAPF), a 30,000-strong organization that promises to “wage peace for a more secure world.” Duda not only drove the formation of the chapter – NAPF’s first local chapter in its 27-year history – but he actively carries out the mission to “educate and empower” people by speaking to grass root groups at local churches, synagogues and in academic settings about the dangers of nuclear proliferation.

Toward that end, Duda also works with the Multifaith Voices for Peace and Justice to educate people on the myths and realities of nuclear arms. “It is amazing,” says Duda, “that, given the level of the threat – nuclear weapons are virtually the only thing that could destroy the United States – the issue falls so easily off people’s radar.”

That’s less likely to keep happening thanks to Duda and the organizations he’s working with.

I couldn’t agree more about the importance of the issue of nuclear arms. On that score, I highly recommend a recent book: “The Dead Hand: The Untold Story of the Cold War Arms Race and Its Dangerous Legacy” by David E. Hoffman, Doubleday (2009), 575 pp.

Here’s another book recommendation to go along with Jym’s: “One Minute to Midnight: Kennedy, Khrushchev, and Castro on the Brink of Nuclear War” by Michael Dobbs. It’s about the Cuban missile crisis – and I found it to be a great read! It’s just out in paperback – Kepler’s appears to have it in stock.