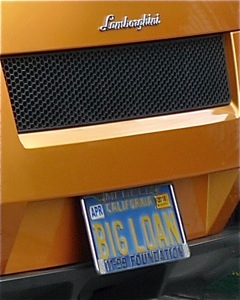 Having spotted this streamlined roadster at the back door of the Golden Shears, we wondered, given the shiny golden color,  if it might be the new company car for that long-time Menlo Mainstay.

But, no, the owner of this $200,000 Lamborghini Gallardo was seen exiting Golden Shears with a fresh chop before stopping to get his clothes out of the car and heading over to the laundry.

The license plate makes a wry comment about this particular form of transport and begs the question: Doesn’t everyone need a 520-horsepower V10 engine with a robotic 6-speed transmission for running the usual Menlo errands?