Louis Arenas, the man with the Golden Shears 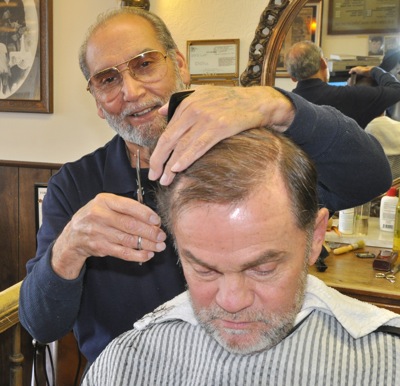 After completing barber school in 1957 and working for several years in the San Jose area, Louis Arenas began looking around the Mid-Peninsula for a place where he could introduce a full-service barber styling shop. In 1963 he discovered an available space right in the middle of Menlo Park’s downtown on Santa Cruz Avenue. He opened Golden Shears on April 7th of that year and hasn’t looked back.

From the beginning the shop offered professional services for the entire family including a manicurist, a porter for shoe shines and a facility in the back for sauna bath and massage. The front section of the shop had five barber chairs. After the first few years the demand for hair services led to replacing the back facility with three additional barber chairs and a three-shampoo sink area.

The Menlo Park community has responded by repeatedly coming back – often for several generations – for their hair care needs. Being in business at the same location for so long has given Louis the opportunity to hold several anniversary parties in the shop for staff, friends and customers—10, 20, 30, 40 and soon 50 years. Golden Shears remains popular; it was voted best barber shop for the ninth year in a row in the 2009 Almanac Readers’ Choice survey, a testament that Louis is doing something right.

Louis emphasizes that the success of the shop owes a lot to the staff – stylists who over the years have consistently provided the services and styles that the public wants. Today eight professional stylists work at the shop. This includes Louis himself, who after nearly 47 years is still working in the shop  four days a week.

Although hair styles have changed, the shop today retains much of its original character. Louis likes to display some of the shop’s first equipment and photos of the early days. Some things have changed, though; on one wall is the original price list – hair cuts $3.