The jewel of Santa Cruz Avenue 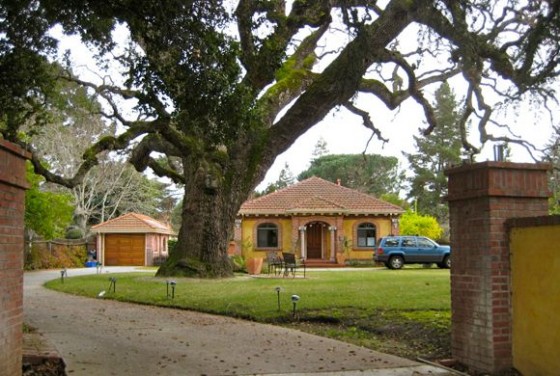 The jewel of a house at 1445 Santa Cruz Avenue can now be more fully appreciated, thanks to the fact that some foliage was removed a couple of years ago. About the same time, a colorful wall matching the dwelling’s style was added, further capturing a passerby’s attention. The house itself is set in the back of a narrow but deep lot, which gives the residents a sense of isolation from the street.

The story we hear is that the house was built in the mid-1940s by two Italian-American brothers who at the time were also working on construction projects at Stanford. The tile roof and brick trim contrast pleasantly with the yellow stucco walls. The columns and capitals have a whimsical touch 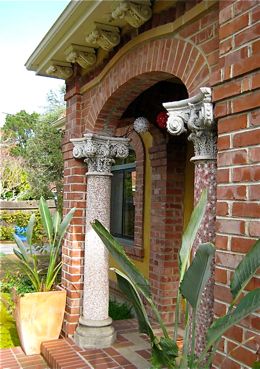 Outside there is a matching one-car detached garage, and the hardscape in the back also matches the style of the house. Finally, look at that great oak tree centered in the front lawn with the driveway circling gracefully around it. In some sense this is a mini-Flood estate.

Do you know any of the history of this house? If so, please leave a comment.

I just have to say how much I appreciate this article. I used to pass by this house on my commute to and from work. There are so many beautiful houses on Santa Cruz Avenue, but this one caught my eye. I would always try to take a peek at it when I’d drive by. Thank you for showing more of the house and for seeking it out as a story subject.

Sunila, thanks for the comment. Our contributor Jym continues to unearth stories about Menlo’s jems, so we’ll hopefully cover more about the houses you drove by in the future.

I’m quite pleased with the information in this one. TY!

Hope it’s not too late to comment on this article…I just caught it as a link from your current article, Aug 2012.

Our home in Woodside (built 1935) used salvaged parts from the Flood mansion as well. I’d be so interested to compare notes with the new owners. We have doors, windows, stained glass, brick, a fireplace and our family room was constructed from the tack room planks, we’re told. I’d be pleased to show them around, if it would be of interest. Email me, if so. And good luck with the remodel…a labor of love, I know!