In conversation with Florence Detlor 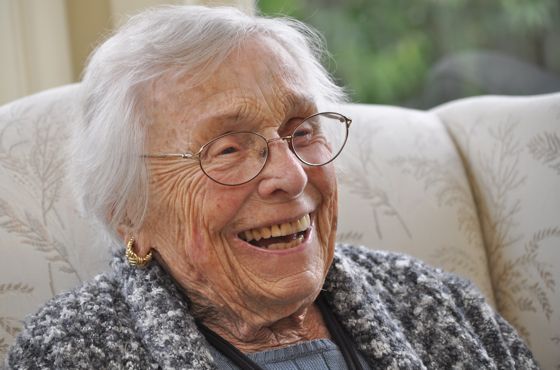 When reporting a story, the usual course is for the interviewer to ask and the interviewee to respond. That wasn’t the case on a recent afternoon with 99-year-old Florence Detlor, a Menlo Park resident of 55 years. She had as many questions as she had answers, beginning with “tell me about this InMenlo endeavor.”

That may be less surprising given Mrs. Detlor’s interest in writing (and reading for that matter). “I write a monthly newsletter for the Menlo Park Presbyterian Church Women, ” she says. “I’ve dropped creative writing but still enjoy getting the facts together.”

While others have suggested she write her life story, she’s resisted. “I just finished reading a book and the woman in it says, ‘everybody has secrets.,'” she says. “I thought how true that is. If I was to write my story I would have to be honest – and I don’t want to be! Why share the negative – you can’t pretend it’s all been absolutely great.”

If  you’re getting the idea that Mrs. Detlor doesn’t miss a beat, you’re spot on. She may have just celebrated her 99th birthday but her keen intelligence and crackling wit are much apparent. She lives independently in the Menlo home she and her husband purchased in 1955 and keeps a very active social life. There are two other widows within a couple of houses and they serve as an ad hoc neighborhood support group.

Mrs. Detlor attributes her long life to “genes and attitude,” and while she gives a lot of credit to the former, as an observer it’s hard not to believe that the latter has  been a major contributor.  Take, for example, her embrace of modern technology including email and social networking. “I need to learn more about computers,” she says. “I just read an article in the newspaper about apps. I found myself in territory I didn’t understand but I want to find out what apps are and how they’re used.” [A quick iPhone demonstration was provided.]

Given her age and years in Menlo, a likely assumption might be that she is Menlo’s oldest resident living uninterruptedly in the same place. Not so, explains Mrs. Detlor: “That would be Isabel Wolford – she’s 103 and I think moved here about the time we did.”

This year she celebrated her birthday with her two daughters and other close family. What about the big 100 next year? “Let that happen!” she says.

Wow, what a great article – and such an inspiration!

Thanks so much for this wonderful article on Florence. She is a great lady and your interview got it just right. She is so sharp witted and so ‘with it’ and absolutely amazing that she dazzles those of us who know her.

I also send congrats to your photographer!!

Florence, you are forever young and an inspiration to all of us old farts!!
Love,
Kirby