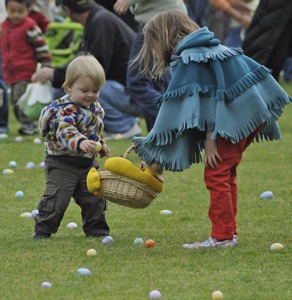 Editor’s note: We think we got a lot of fun photos at this morning’s annual Easter egg hunt at Burgess Park in Menlo Park. What we don’t have is text, so we’re wrapping our gallery of eager egg hunters around Wikipedia’s description of the egg hunting tradition.

“Egg hunt is a game during which decorated eggs, real hard-boiled ones or artificial, filled with or made of chocolate candies, of various sizes, are hidden in various places for children to find. The game may be both indoors and outdoors. The egg was a symbol of the rebirth of the earth in Pagan celebrations of spring and was adopted by early Christians as a symbol of the 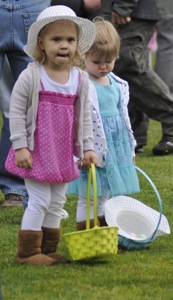 rebirth of man at Easter. The egg symbol was likened to the tomb from which Christ arose.  Traditionally the game is associated with Easter and Easter eggs (Easter egg hunt), but it has also been popular with spring time birthday parties.

“When the hunt is over, prizes may be given out for various achievements, such as the largest number of

eggs collected, for the largest or smallest egg, for the most eggs of a specific color, consolation prizes, booby prizes, etc. Real eggs may further be used in egg tapping contests. If eggs filled with confetti left from Mardi Gras (cascarones) are used, then an egg fight may follow. 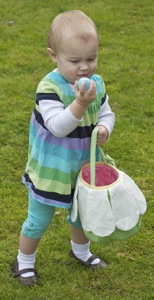 “Eggs are placed with varying degree of concealment, to accommodate children of varying ages. In South German folk traditions it was customary to add extra obstacles to the game by placing them into hard-to reach places among nettles or thorns. 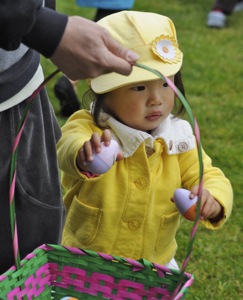 Egg hunts are a subject of the Guinness Book of World Records. For example, Homer, Georgia, United States was listed in 1985 with 80,000 eggs to hunt in a town of 950 people (no longer a record).”