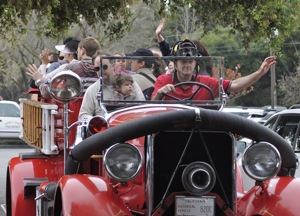 The line was almost as long for taking a ride on Old Tom, the Menlo Park Fire Protection District’s vintage engine, as it was to get your picture taken with the Easter Bunny at the morning’s city-sponsored Easter festivities. According to the MPFPD website: “Old Tom was built in 1935 by the Seagrave Corporation. The original owner of this now historical antique fire engine was the Sausalito Fire Department.  For 20+ years this pumper served the town of Sausalito and included the Golden Gate Bridge which was constructed in 1937.

“It is believed that sometime in the late 1960’s a private citizen from Woodside purchased the retired Seagrave for an unknown amount of money.  In the mid 1970’s ownership changed hands once again and for $1.00 the Menlo Park Fireman’s Association purchased the 1935 Seagrave.  The name “Old Tom” was chosen and named after one of Menlo’s finest, Chief Thomas Cuff.”