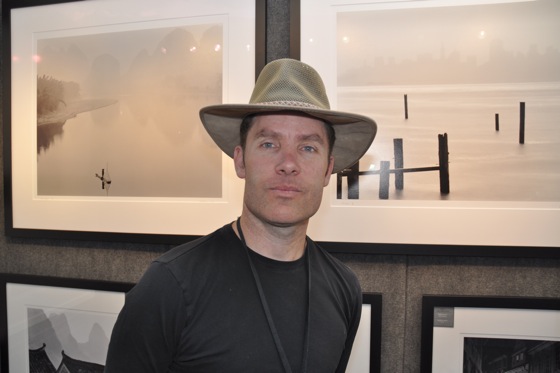 Another of my favorite artists, photographer Chris Honeysett, is participating in this weekend’s Sidewark Fine Arts Festival on Santa Cruz Avenue in downtown Menlo Park. Chris shoots black and white using a large 4×5 view camera – check out his website for a look at his galleries. I first noticed his work at a show in Menlo Park in 2003. The photograph over Chris’ left shoulder (in photo above ) – the one showing pilings in San Francisco Bay looking across from Sausalito to a fog-shrouded city – hangs in my office.

Last August, I participated in one of his first photography workshops – a weekend of exploring North Beach and Chinatown in San Francisco. We ended on Sunday shooting Embarcadero Center, which turned out to be one of my favorite spots. I learned a lot from Chris during that workshop – one of the primary lessons being to slow down and compose  before firing off pictures. With today’s digital cameras, it’s just too easy to point and shoot and the composition suffers. Here are two of my albums on Flickr with results from the workshop with Chris: August 29 and August 30. I can highly recommend taking a workshop from Chris .