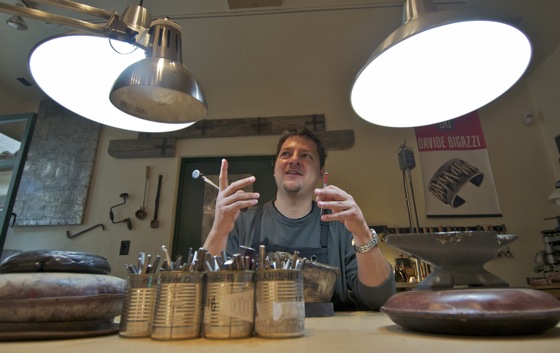 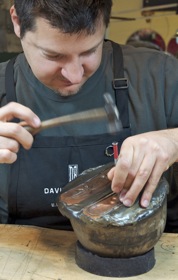 Artist Davide Bigazzi practices and teaches traditional silver and gold smithing from his tidy workshop in the confines of Menlo Park’s Allied Arts Guild. That there is irony in practicing ancient technique – including chasing and repoussé – in the heart of technologically uber-advanced Silicon Valley is not lost on Davide. His trade is so ancient that he has to make his own tools.

But, lest there be any doubt, many of his elegant creations adorn well-heeled and well-dressed local femmes. Davide manages to create pieces in styles that both hark back to medieval times and appeal to 21st-century stylistas. Innovation, it would seem, is not solely the province of the Valley’s computer scientists.

InMenlo caught up with Davide on a rainy Tuesday morning, as he was gently hammering an alloy bracelet. As is often the case, Davide had cast the metal himself, a lump of precious-metal alloy that he repeatedly rolled in a press and then coaxed into a thin, elegant band – destined, perhaps, to rest someday on a fair wrist.

Davide was slowly teasing a vine-and-leaf motif from the metal with rapid, almost-imperceptible taps of a chisel-like tool and a small hammer. “It’s not good to work too long on just one piece,” he says, switching to a large, silver serving plate with a very different pattern, hammered in much deeper relief.

About Menlo, Davide and wife Elisa say they fell in love with the Allied Arts and its Menlo Park surrounds on a visit in 2006. Previously they had a studio in San Diego and another in Italy, to which they still return for two or three months a year.

Davide’s creations, which hark more to art than jewelry, appear to be a hit, as are his classes. Students travel from all over America to attend his workshops in San Francisco, New York and Florence.