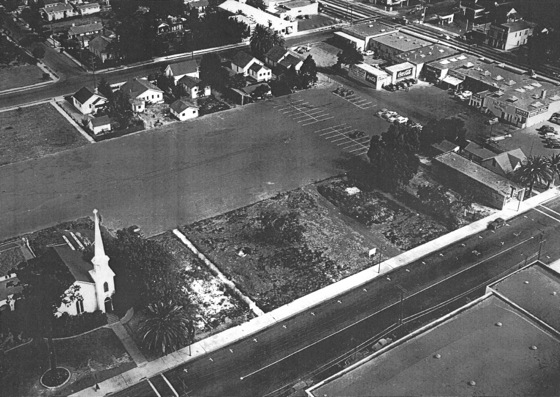 Note: Bill Frimel, who contributed this post, is currently historian at Menlo Park Presbyterian Church. The aerial photo was taken by Elmo Hadden, who owned Menlo Camera Shop (housed in the old yellow house on Santa Cruz Ave.), from a helicopter flown by Stanley Hiller in 1949 during downtown Menlo’s “renovation.” Both black and white photos are courtesy of MPPC. Photo of the church today by Scott Loftesness.

Menlo Park Presbyterian Church (MPPC) was originally located on an acre of land fronting Santa Cruz Avenue at the present site of Union Bank and Menlo Hardware – ironically quite close to where it currently holds its Cafe services. The oldest church in Menlo, it was organized in 1873 by 13 charter members.  Since it was the only Protestant church in the area, the congregation was comprised of many denominations. 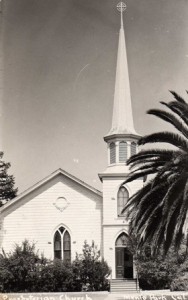 The original church building (pictured left), located at 700 Santa Cruz, was completed in January 1875 at a cost of $4,000.  Contributions for its construction were made by Messrs. Latham, Selby, Atherton, Felton and Judge Coon. Built out of redwood and seating 168, it featured a white steeple and a Gothic façade, a common New England style.

The church was supported by pew rent and offerings.  A double pew, depending upon its location, could be rented for between $10 and $50 a year.  Rent for single pews was $2 and $10.

The church membership continued to grow, resulting in the need for expansion.  An educational/social hall building was constructed on the site next to the church in 1930 at a cost of $8,000. 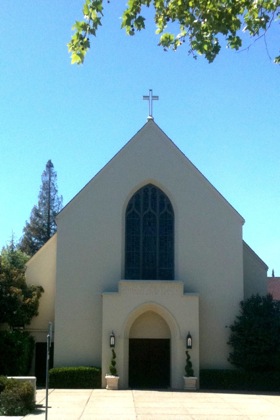 During the post-WWII period Menlo Park was growing, so civic officials decided in late 1946 the town needed a free parking business district. Part of the plan was to widen Santa Cruz Avenue and build a parking lot in the center of the block bounded by El Camino, Santa Cruz, Chestnut and Oak Grove.

The shortfall of $9,000 was paid thanks to a citizen’s committee formed that represented members from various religious backgrounds – Episcopal, Lutheran, and Roman Catholic.  A slogan, “Unity in this Community” was adopted, and a house-to-house canvas was made to collect ‘cash’ to help the Presbyterian Church pay its assessment. The generosity of Menlo Park residents has characterized this community ever since.

In September 1950 the old white steeple church was deconsecrated and torn down, and a new church facility was constructed and occupied at the corner of Santa Cruz and Johnson. MPPC currently has a membership of 4,500.