One building – and a web of tunnels – is all that remains of Menlo’s military past, Camp Fremont 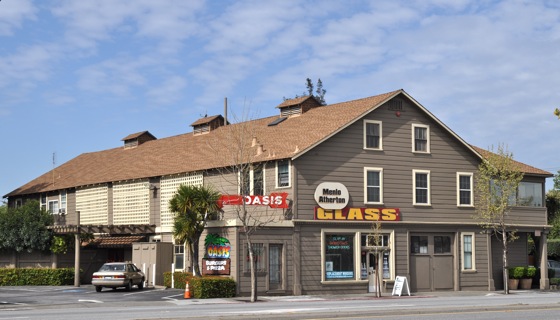 Only one building – which now houses the Oasis Beer Garden and Menlo Atherton Glass – remains from a brief two-year period in Menlo Park’s history that turned the town into a training ground for troops earmarked for the battlefields of World War I. Camp Fremont became home to over tens of thousands of troops, none of whom made it to the European theater, although some ended us as the “forgotten Army” stationed in Siberia after the Armistice to guard German supplies.

Wrote journalist Don Kazak in the book Palo Alto: the First Hundred Years: “Camp Fremont had 27,000 men at its peak, and a curious history. Construction began in July 1917; was halted for three weeks by the War Department at one point; saw its troops transferred to the East Coast; finally received the 8th Division, which was trained for France but ended up in Siberia; had a chance to become a permanent Army camp but was closed after the war; and saw its buildings all dismantled or moved, leaving Menlo Park much as it had found it – a sleepy little hamlet of 2,300 souls.”

In addition to the Oasis building, another artifact from Camp Fremont remains. A report penned by an SLAC summer intern Annette Cords explains that “SLAC land was probably a site for artillery practice, and according to references on military maps, six tunnels were dug. The entrances were covered in the 20s to protect children and wandering cattle. Evidence of these tunnels is still uncovered from time to time.” There’s a picture of one in her report archived on Short Features in SLAC History under Camp Fremont.

Thanks for another interesting story about Menlo Park’s past. But what about the MacArthur Park Restaurant building? Didn’t it begin it’s life in Menlo Park as the “Hostess House” for Camp Fremont soldiers? There is a photo in “Menlo Park: Beyond the Gate,” but exactly where in Menlo Park the Hostess House was located is not mentioned.

The Hostess house was located where Menlo Park Presbyterian Church is located now, corner of Johnson and Santa Cruz.

Here are a couple of interesting links: