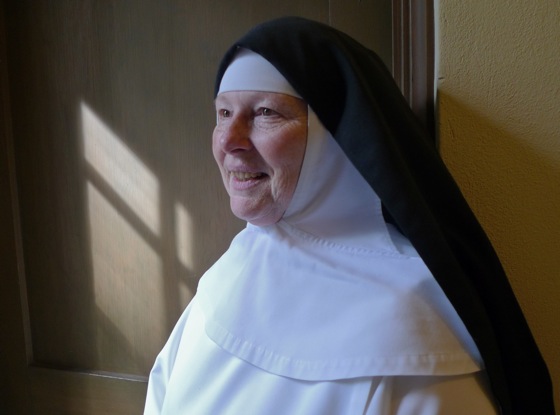 The monastery bell is rung, and the huge oak door swings open. The face is incredibly welcoming, filled with hospitality, an obvious talent given that Sister Marie Christine is the “extern” (outward face) of her Dominican Contemplative order.

A monastery of cloistered nuns in Menlo? There’s agreement that the Corpus Christi Monastery on Oak Grove just may be the most hiding-in-plain-sight institution – and group of buildings – in all of Menlo Park. Sister Marie Christine agrees: “When people do find us, they always say, ‘I can’t believe how many times I drove by on and didn’t notice you.”

Those that do and who come by for a visit – as your InMenlo team did recently – are thrown back into another time and space. But spend a couple hours on its 13-acre grounds and the re-entry into the outside world feels noisy and chaotic.

How a 20th century monastery was born

Sister Marie Christine patiently – and animatedly – explains the monastery’s history. How the acreage was purchased when Oak Grove was still a dirt road and the land was planted in flowers, which were sold at the flower market in San Francisco. The original house, which may be the oldest dwelling in Menlo, is still on the property but behind cloistered walls so not available to visitors. 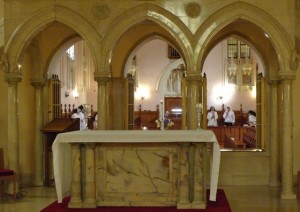 The cornerstone was laid in 1927, although it was into the ’40s before the monastery was completed. The original design was modified over the years to meet capital requirements. Even with modifications, the space is not really of the 20th century – with its high ceilings and stained glass, separation grates and screens – let alone the 21st.

Early in their life together, the Sisters made vestments. Today, they make Altar bread used by the Archdiocese of San Francisco at local parishes. They also make apple nut bread from their apple orchard. Sister Marie Christine is quick to acknowledge the support they’ve received over the years from nearby Roger Reynolds Nursery.

Outside community celebration on Sunday, June 6

The community’s big public event each year is  Corpus Christi Sunday, this year held on June 6.  “We will hold a special 10:00 a.m. Mass in our chapel which concludes with Benediction of the Blessed Sacrament and Adoration,” says Sister Marie Christine.  “Fr. Nathan Castle, OP, who is the director of Catholic Campus Ministry at Stanford University, will be the celebrant and homilist.”

While the Sisters are cloistered and only have outside contact with their families, the monastery’s public chapel is open daily form 6:30 am to 5:30 pm for prayer. Visitors are also welcome to share in the morning Eucharist at 8:00 am and vespers at 5:00 pm. The large chapel is divided by screens, which are opened during services with the Sisters on one side and visitors on the other

The Sisters also find outreach via their prayer partners. Many are young people studying at Stanford who are just embracing the Roman Catholic faith. “We may never leave our monastery but we find ourselves in the world through our prayer partners,”  says Sister Marie Christine. “Many return years later to pray with us in person.”