Toshio and Keiko Sakuma: Partners in work and life 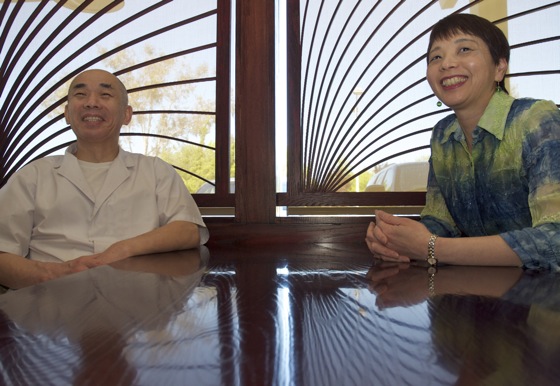 Already married, Toshio and Keiko Sakuma almost didn’t become the business twosome so well known to area residents – all because of some dropped plates. “I kept breaking dishes – and he didn’t like it,” says Keiko, pointing to her husband.

The site of the their almost none beginning was Toshio’s first restaurant in Palo Alto. By 1994, when the popular Toshi’s debuted on El Camino in Menlo Park, they were partners in work and life for good.

Six years ago they opened Kaygetsu in Menlo’s Sharon Heights, a distinctive destination restaurant that has achieved critical accolades from professional and amateur reviewer alike. It’s unique in offering kaiseki – a classic, multi-course Japanese meal featuring different style food – along with a sushi menu.  Or, as enthuses one Zagat reviewer, “Japanese creations you could never even imagine!”

“Because we serve such traditional Japanese food we were initially surprised that we had so many non-Japanese customers,” says Keiko. “But people have vacationed in Japan. They can come home and have the same experience here.”

Customers come to Kaygetsu from all over the Bay Area – north to Santa Rosa and Napa, south to Santa Cruz. It’s often a pick for special occasions. Service – and food – is personal. “It’s the two of us doing everything” says Keiko.

At lunch, the VC crowd shows up. The restaurant has become a bit of a barometer for the investing community, according to the Wall Street Journal (no less). The new Rosewood Hotel just up Sand Hill Road from Kaygetsu has been a plus for their business. Says Keiko: “People come once and then come back when they’re in town for business again.”

What’s the secret of maintaining – and surviving – a successful marital and business partnership? Keiko is quick to answer: “Toshi does the cooking and I do the administration.” While Toshi does the sushi and sashimi, the kaiseki menu is overseen by Executive Chef Shinichi Aoki. Shinichi, who has been part of the kitchen team since the original Toshi’s and gets accolades from Michelin and the Chronicle’s 100 Best Restaurants.