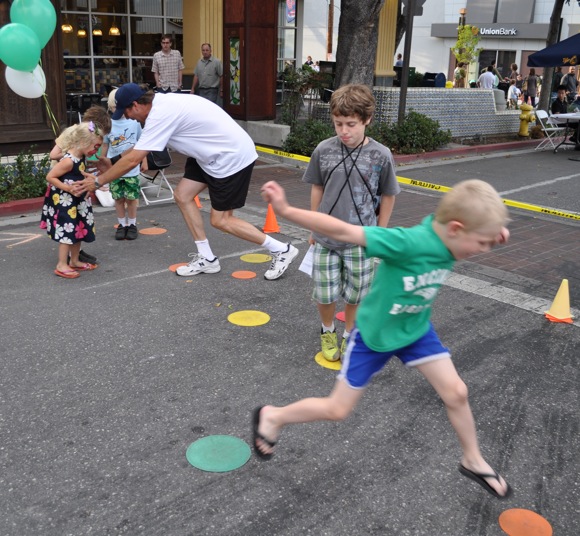 Watch the crowd go by – from almost newborn to some of Menlo’s most senior citizens. Look at the styles – from preppy to hippie to something not quite describable in between. Listen to the languages – at least a half dozen could be heard within one block. Hear the bands – one every other block, largely aging garage bands who loved the music they played from blues to rock. Such was the scene at tonight’s first of the summer downtown block parties that shut down Santa Cruz Avenue from University to El Camino.

The Menlo Park Chamber of Commerce sponsored event offered something for almost everyone. But maybe the most delighted were the kids, from the ones playing a cool hopscotch type game to the ones who who climbed aboard Menlo’s oldest fire engine (a perennial fan favorite).  Missed the fun tonight? The second and final block party of the summer is on Wednesday, August 11.

Tonight’s Block Party was great, not as hot compared to last year and a lot of people out on Santa Cruz Avenue enjoying the venue! What a fun event, some of the music was fantastic! Looking forward to participating in August!!