Pastor Jon Coyne: Making an impact on the lives of his congregation and the community 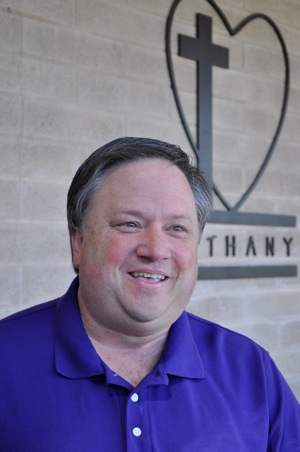 Meet Pastor Jon Coyne, who’s led Bethany Lutheran Church in Menlo Park for the past 15 years, and prepare for a cavalcade of thoughts, ideas and observations from a man who’s abundantly comfortable in his skin and enthusiastic about his vocation

“I get to meet people one on one, find out what they do, hear what’s on their hearts,” he says. “Guess it comes with the territory, but people are really transparent when I walk in the door. That’s great.”

Pastor Jon has local roots. He grew up in San Francisco and graduated from Cal. He worked six years before enrolling at Concordia Theological Seminary and values the time he spent in the business world. “It gave me the experience of seeing how people work, what they struggle with,” he says.

Being a minister in Silicon Valley has its distinct challenges, Pastor Jon admits. “If you’re not from here, I think it takes years to understand the culture and the way things works. I know I do things differently here than pastors in the other parts of the country.”

While Bethany may be best known to the greater community for its ever-changing, low tech sign out front – the Google-related message was highlighted on InMenlo and other local media – under Pastor Jon’s leadership the church has embraced high tech, specifically digital media.

“Churches are typically 10 years behind, but we don’t have that luxury in Menlo Park. We’ve moved to electronic communication, offering webinar-based Bible studies and exploring how to do church online. We’re also looking at new formats and new ways to present messages when people come to worship on Sunday.”

Getting the word out about our kids over-packed lives

The move to digital may be out of necessity. But what Pastor Jon is most passionate about – and believes must be changed – is  the negative consequences of the hard driving, achieve-at-all-costs culture on our area’s children and youth.

“You can’s ask children to do things beyond their emotional and cognitive age,” he says. “So last year we started a speaker series, which came out of our strong conviction that our children are being pushed too hard. I’d picked up the book Doing School: How We Are Creating a Generation of Stressed-Out, Materialistic, and Miseducated Students at Kepler’s. The idea was to have people speak on the topic and invite the community.

“The local schools took notice and now they’re offering similar speakers. I’m really proud of that. We feel that we were part of a small group that got the word out that this is something the schools must address.”

Given the speaker series success – and its embrace by schools – Pastor Jon and his staff are exploring other areas where they can make an impact.

“We live in a 24/7, 365 day a year world. The church has long been one hour, one day a week. There’s a lot room to integrate faith more into people’s lives.”