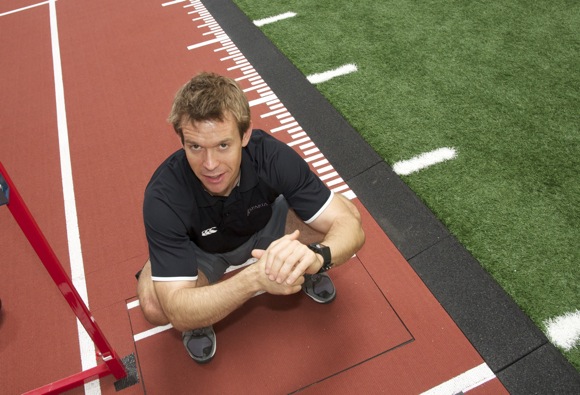 Most people attend medical school to practice medicine and treat patients. Not Dr. Phil Wagner. “I was always interested in training athletes,” he says. “My career path was based around that from the beginning.”

The East Bay native, who attended UC Davis undergrad and got his medical degree from USC, made his way to Menlo Park largely because of the city’s location.  He opened Sparta Performance Science, which offers personalized athletic performance analysis and training, two years ago on Constitution Dr., because it was easily accessible from both 101 and the Dumbarten Bridge. But he’s  glad he found Menlo and now lives here with his wife and children as well.

“I feel really indebted to the surrounding community,” he says. “We didn’t have a lot of athletes at the beginning but the customers we did have were really loyal and carried us through. In addition, the parents of our high school athletes were incredibly supportive of what we were doing and provided a lot a guidance and were great business mentors. I’m a physician and a coach, not a businessman.”

About half of the athletes who use Sparta’s services are high school students, although Phil says they usually don’t train many freshman or sophomores. “At that age, kids should be playing and sampling different sports,” he says. “The discipline of playing one sport should not be forced too early.”

Whether high school, college or professional, athletes who find their way to Sparta are first tested on a force plate using the company’s proprietary software. (Phil is pictured on the plate.) The results show how each individual athlete moves and what his/her strengths and weaknesses are in relation to force and time output. Wagner says the process is similar to taking a fingerprint, but of the total athlete. A training program is then designed based on that fingerprint.

“We approach athletic training and how we run the facility differently,” he says. “It’s not just about training, it’s about eating correctly and adopting other good habits. We have highly trained coaches, most with master’s degrees. We train in very small groups. Because of that our prices are higher. That fact –  and our different approach – were initially obstacles we needed to overcome.

“This past February, we started to fill up and at this point we’re full though August. So now we are working hard to keep up with demand.”

Wagner says the athletes who seek Sparta’s service play all different sports, although baseball and volleyball players take a slight lead. “But it’s really all over the map – we’re fortunate in that regard.”