Sweet on each other and their new naturally sweet drinks 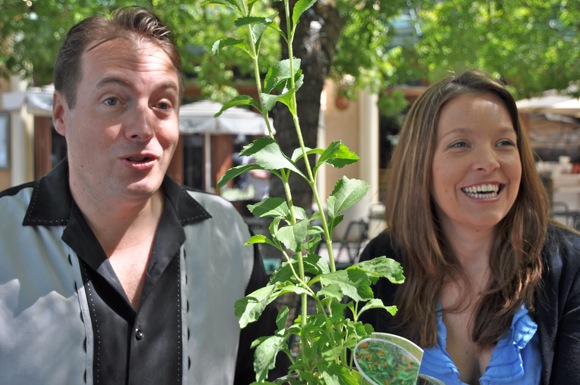 He’s a let-it-all-hang-out American. She’s a more guarded Kiwi. Peter Walsh and Melanie Carroll met through friends five  years ago – and bonded, in part, because he was allergic to Splenda and she thought U.S. soft drinks too sweet.

It was the start of relationship that’s endured and given birth to  California Naturals, a Menlo Park based start up that launched in 2009. Their Kahe Sparkling Nectar – all natural, low-calorie sparkling juice drinks – come in three flavors, Kiwifruit, Passion Fruit and Bing Cherry and can be drunk alone or mixed as a cocktail.

Peter grew up in Atherton and much of the original experimenting with various flavors took place in the cottage kitchen behind his parent’s home. He got the early support of his mother Jane and, with business plan in place, the endorsement of an initially more skeptical father.

“It was a long journey,” says Peter. “We knew we wanted to produce the drinks but really had no idea how to start a food company. We kept calling people and asking a lot of questions. Not everyone was interested in offering advise, but those who did help were really great.”

The name Kahe is derived from the Guarani Indians name for Stevia (shown in photo), a plant native to Central and South America that’s sweeter than sugar, and one of the two sweeteners used in their fruit beverages. They other is Xylito, a naturally occurring sweetener found in Birch trees, berries, fruit and vegetables.

Peter is quick to give Melanie much of the credit for the company’s launch. “We’d be all ready to go, all set to begun production and then something would happen,” he says. “I’d find myself at the breaking point but Melanie would always keep her cool.”

Melanie admits that she doesn’t have much of a sweet tooth herself. Their different tastes resulted in different reactions during the development process. “I’d love it and Melanie would find it disgusting,” says Peter. John Nava of Sigona’s was an early supporter and refereed by pointing out to the couple that people’s taste buds change throughout the day.

Kahe drinks can be found at Webb Ranch, Sigona’s, Bianchini’s and Draeger’s as well as at cafes. Melanie and Peter are often out and about at tastings – they’ll be at the upcoming downtown Menlo event on August 11.