Sarah Ghandour: Playing her way to a musical future 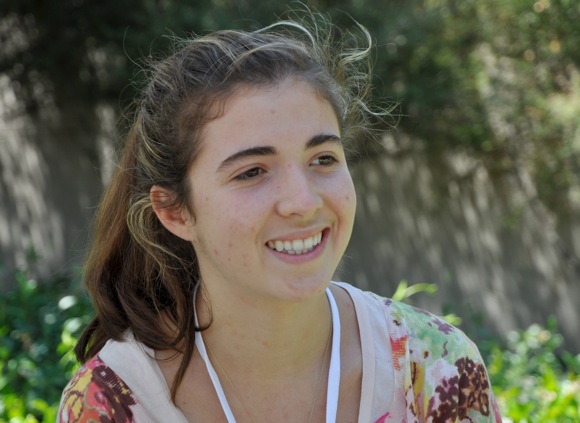 When Sarah Ghandour needs a break from the rigors of cello practice and school work, she hops on her bicycle and pedals to the Stanford Theater, hopefully to see a Ginger Rogers musical. “She’s the one who inspired me to take up tap dancing,” says the accomplished musician who also plays piano and “a little guitar.” It may not be the typical way for a teenager to let off steam, but Sarah’s eyes light up when discussing other popular 20th century artists like Cole Porter, Nat King Cole, Ella Fitzgerald and Frank Sinatra.

This week her focus is different. Sarah, who will be a junior at Menlo-Atherton High School this fall, is spending her fourth year participating in Music@Menlo’s Young Performers Program, with 32 other musicians age nine to 18. “This is a really special chamber music institute,” she says. “You have this amazing number of performers from all over. It’s so inspiring to see them work – and also get a feel for what life is like as a musician. Plus I get to work with other young people. It’s really like no other experience.”

Sarah began playing cello at four; her first teacher was the renowned Irene Sharp. She’s currently a member of the Peninsula Youth Orchestra and recently was selected to perform a movement from a Dvorak cello concerto. “It was really exciting – I love the Romantic era composers,” she says.

The first of this season’s Young Performers Concert is tonight (7/29) at 6:00 pm at St. Mark’s Episcopal Church in Palo Alto. While free and open to the public, a seat pass is required, which can be requested at the will call table one hour prior to the start of the performance. Young Performers Concerts continue through August 14. The schedule is available online.