A gleaming house of glass and light 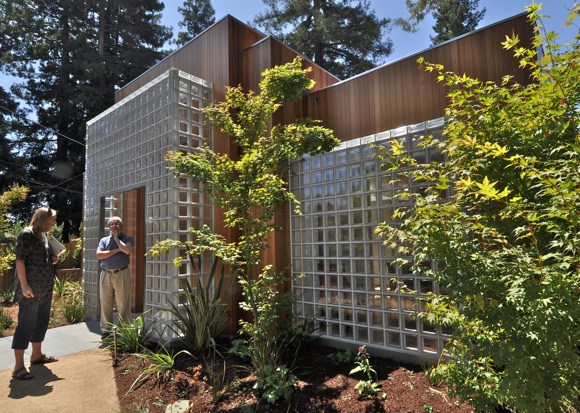 Label it magical. The exterior shines and sparkles, thanks to the beautiful vertical cedar siding and glass blocks that define its profile. The interior is bathed in waves and shafts of light. All of the rooms have glass on three sides, and a row of skylights make the central atrium a glowing invitation to step inside.  “We discover something new every day, a new shadow here and a new spot of light there,” says Peter Nosler, who with wife Kay built this distinctive residence in west Menlo Park. 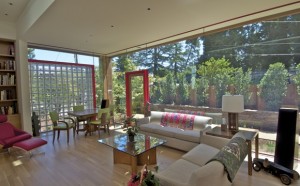 That the house is striking warrants no argument.  “Our neighbors are either complimentary,” says Peter who built the new house across the street from their current residence. “Or else they say, ‘Interesting,’ which may imply a less- than-enthused view.”

The Noslers hired architect John Thodos to design their home after working with him on another house in Carmel. Interior decoration was provided by Elizabeth Hill of Selby House Ltd. “John was not always easy to work with, so there was some refereeing between the two required,” says Peter, “but it all worked out.” (The architect died in December before the home was completed.) 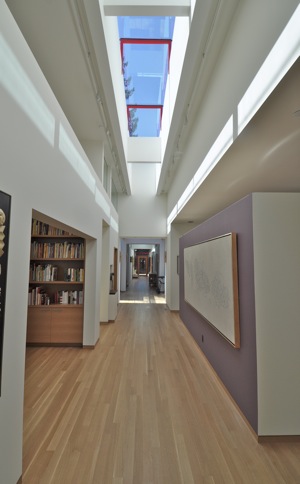 Even with all the windows, the house was designed to be energy efficient – and earthquake resistance. Industrial strength glass is set in frames that allow the roof and floor to move independently of each other, in case of a major shaker. And as the family gets to know their new environment, they’re somewhat amazed to discover there is little direct light in any room at any time of day.

The house also has subtle accessibility features. An elevator to the basement living space is tucked behind a striking wooden door; steel railing stitched along kitchen counters makes it easier for a person in a wheelchair to pull themselves around. A recess in the entryway artfully stores canes.

“Big Red is happy,” says Peter, gesturing at a magnificent redwood just outside the dining alcove, which sits not on a conventional foundation but on a ground-hugging cantilever so as not to to not impair the tree’s roots.

“This house so exceeds our expectations,” says Peter. “There’s not a square foot that’s not fun to be in.”

Congrats. Looks great. Love the glass block and all the windows.

Kudos to you for building a great looking house. The last thing West Menlo needs is another McMansion/Tudor/Tuscan villa behemoth.

We just finished our Eichler remodel and kept it true to the aesthetic. We also get the ‘I LOVE it’ or ‘interesting’ response. There’s really no in between.