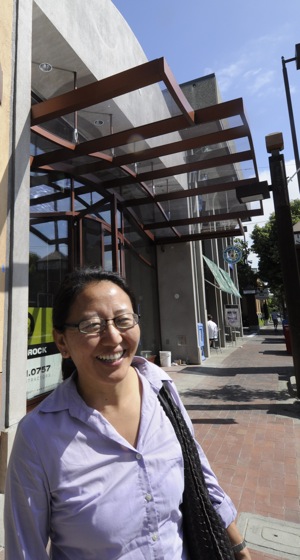 Yonten Raza was born in Nepal where her Tibetan parents had immigrated in 1959. In 1985, when she was 18, she came to the U.S. with the help of American friends, initially living in Berkeley and working as an au pair. Her father was a small businessman in Nepal, so it was natural that she should consider starting her own business. A friend at Stanford suggested Menlo Park as a good location, so 13 years ago she opened dolma Handicrafts on Santa Cruz Avenue featuring Tibetan handicrafts that she personally selects and brings to the U.S. Later she added dolma Tibetan Carpets also on Santa Cruz Avenue.

Today Yonten has five handicraft shops – Mountain View, Palo Alto, Menlo Park and two in San Francisco – as well as a second carpet shop at the San Francisco Design Center. She plans to consolidate the two carpet shops in the new building she is having constructed at 622 Santa Cruz Avenue, a block west of El Camino Real.

This innovative building will have a condominium above where Yonten will live and features stacked parking for two cars inside the back of the building. The building is being constructed by Cody-Brock, the same general contractors who built 1142 Crane Street, another mixed-use building completed in 1999. Yonten says she really appreciates the urban environment provided by the downtown Santa Cruz Avenue area and is excited about living in her new building.