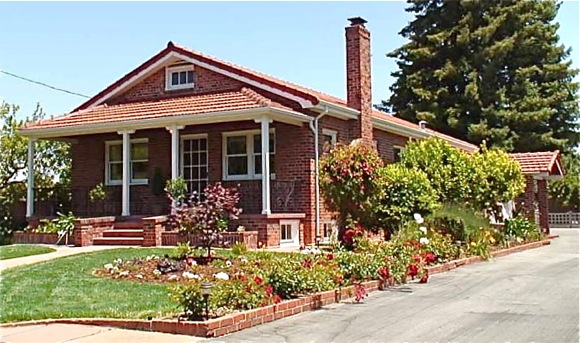 You’ve probably noticed the simple but sturdy-looking brick house that sits on Santa Cruz Avenue opposite St. Raymond Church. And you’d be right to assume there must be a story behind that house.

Lorenzo (Lawrence) Guglielmo began working as a bricklayer just nine years after he was born in a small village in northern Italy. He lived and worked for awhile just across the border in Chamonix, and before turning 21, had built a new house in his native village for his parents. Finishing this, he moved on to New York City doing construction work, then to Michigan to work in mines, and finally back to construction work in Chicago.

In 1945, he decided to move to California for his wife’s health. He had relatives living 0n the Peninsula and soon bought property in Menlo Park on Santa Cruz Avenue where he proceeded to build a brick house that he had designed himself. At the time there was a large pasture across the street, part of the McGinnis Estate, now the site of St. Raymond Church.

Lawrence first built a detached two-car garage where he and his wife lived while he worked on the house itself. The garage still has a bathroom although the kitchen has been dismantled. The house was finished in 1948, but his wife had died, so he didn’t move in until about a year later after marrying Margaret, a widow with two young daughters, Joan and Margie.

Lawrence worked for Person and Wik, a construction company in Burlingame. Among other projects, he worked on the construction of Menlo-Atherton High School and the old Safeway that was at Five Points in Redwood City. Closer to home, he built some brick planters (since removed) that were in the Menlo Park Presbyterian Church near the altar. He died in 1984 just shy of 93 years old; Margaret continued to live in the house until she died in the early ‘90s.

The house itself is reminiscent of many Chicago neighborhoods but unusual for Menlo Park. The walls of the house are reinforced brick. The original tile roof is still intact. The living area of the main floor is about 1400 square feet. A finished basement extends the length of the house, even under the front porch. While much of the interior has undergone modernization, the exterior remains almost exactly as constructed by Lawrence.

I can’t think of how many Christmases, Easters, Thanksgivings, family birthdays, Sunday chicken dinners, and other days — ordinary and special — that I spent in this beautiful brick house. All these memories: Listening to Grandma Margaret and Grandpa Lorenzo bicker in Piedmontese. Breathing in the heavenly scent of Grandma’s risotto cooking on the old gas stove. Playing with my brothers and cousins down in the basement when it was still just a cement cavern. Laying on the cool cement floor down there on hot summer days. Wandering around the gated gardens with the trees of figs, plums, cherries, walnuts, and apricots. Watching Grandpa use his spade shove to turn compostables like coffee grounds, egg shells, carrot peels, and lettuce stems into the rich black soil of the little kitchen garden behind the garage, making the soil even richer and blacker every time. Sneaking over to Grandpa’s tomato and green-bean patch on the adjacent quarter-acre that Grandpa later sold in the 1970s to a lovely lady who built a house there. Looking for spiders in the storage bay in Grandpa’s basement work room, which smelled like Aqua Velva because he always shaved there. Opening the huge, heavy, iron door of the wine cellar in the basement to look at the rows and rows of mason jars of tomato sauce, plums, and apricots that Grandma canned every year so they would have summer’s bounty through the fall, winter and spring. Giggling at the silly “throne room,” the weird bathroom with the toilet and shower oddly raised a couple of feet above the basement floor level. Walking the brick garden borders like balance beams around the yard. Feeling a belly ache of creepy fear when we would go into the detached garage and look at all of the interesting old tools for farming, bricklaying, carpentry, and auto work. I’m almost 50 now, but I wish often that I could go back in time to be with them, in that special house that Grandpa built and Grandma made into a home. Thank you, Mr. Clendenin, for appreciating that house and writing so thoughtfully about it.

Wonderful story and warm remembrances. Your comments, Jamie, bring Ray Bradbury to mind. What a vivid evocation of family and bygone days. Thanks for both the original story and your wonderful shared memories!

I thank JC for the history of our new house. Paula and I came from Cincinnati in 2007 where on professor incomes we lived in great houses and castles from 1890 – 1910, for a pittance of Menlo property. We sold Paula’s house in Cincinnati, built by the president of the Stockyard bank, 1890, for 256K. Twelve rooms, garage, attic and full basement, Queen Anne brick with turrets, next door to a Carnegie Library. Our realtor here said she could sell this house here in 5 minutes for 3 mil. My house of 11 rooms, full basement and 2 car garage, 1908, went for 125K. There were two giant sycamore in the front yard 90 yrs old.
Imagine our shock at Menlo prices.
Yet, in Menlo we have a new home with history. The photo I gave JC shows our front yard. Preserved from the past are many fruit trees. We have added espalier trees and garden beds behind the garage. This Spring we will replace the realtor designed front yard with raised garden beds. With the back yard, this will be almost 500 sq ft of raised garden beds. We expect great summer yields of tomato, pepper and corn. Winter will be cabbage, broccoli, lettuce, etc.
We have added 30 solar panels; our PG&E bill is zero (despite our 1300 gal swim spa at 100 degrees). With 50 rain barrels (3000 gals) we pay little for water.
We will be happy to talk solar and water: logica42@yahoo.com