Barbara and Mark Rosasco: Working to better the lives of Southeast Asia women and children 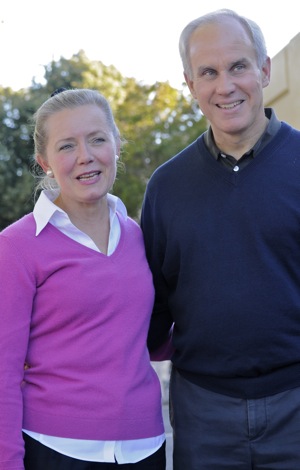 One moment you’re a couple living in Japan – working in international banking and enjoying the good expat life. Then you decide to make a serious right turn, with a vision of starting an enterprise that could positively impact impoverished Southeast Asian people, those who largely go unnoticed outside the tourist meccas.

“We were going to focus on selling crafts made by local people, particularly those made in quantities insufficient to attract the interest of large retailers,” explains Barbara Rosasco about her and husband Mark’s business idea.  “It was always part of our plan to give a portion of the profits back to the country where the crafts people lived.”

Then, says Barbara, “the tail began wagging the dog.”  They were placing increasingly less time on the for-profit making aspects of their new business and more time on the charitable portion. In 1998, they founded Kasumisou Foundation, a non-profit that has since sponsored more than 20 programs or projects aimed at improving the lives of some of Southeast Asia’s most disadvantaged people.

As antiretroviral (AVR) drugs became widely available and free of charge, thanks to programs like the Global Fund for AIDS, Tuberculosis and and Malaria, the Kasumisou Foundation’s AIDS Patient Family Support Group (FSP) evolved from its original role as a  provider of shorter term emergency  humanitarian assistance into a more complex program. It now provides the housing and social support needed to maintain a family so that children are not neglected or exploited and have a chance to break free from the cycle of  poverty.

“If we can give the kids enough education, if we can help them get through school, then we can really break the cycle and make a lasting impact,” says Barbara.

Through its Apsara Arts Association School, Kasumisou also supports a Summer Arts Camp for about 75 children, most of whom are AIDS patients from Cambodian orphanages. The children are taught the basics of traditional Cambodian dance as well as how to play traditional musical instruments.

Settling in Menlo Park after many years in Japan

With so much of the Rosasco’s recent lifetime spent in Japan, the Kasumisou Foundation has drawn most of its support from Asian-based businesses and people. Now that they’re stateside and settled in Menlo Park (where Mark grew up), they’re eager to get the word out about their Southeast Asia work to improve the lives of women and children. As a first step, they participated in both of Menlo’s Downtown Block parties this summer.

“We handed out literature and talked to people who stopped at our table,” says Barbara. “By creating a base of our support within our community, we can continue to make a difference in the lives of the people we serve.”

More information about their projects is available on the Kasumisou website and their page on Global Giving.