How the Newton kids spent their summer vacation 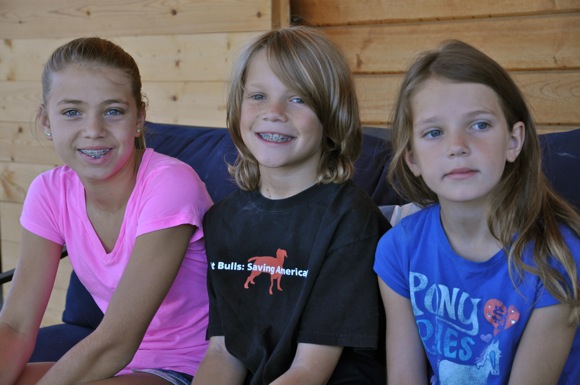 Back in the old days, when the Tuesday after Labor Day signaled the start of school, the Newton kids would be marching into their classrooms today, shortly to turn out a two-pager titled “How I spent my summer vacation.” In their case, the focus would likely be on eight days.

The August start means they’ve already been in school for a couple of weeks – Blake (middle) attends La Entrada,  Presley (right) attends Las Lomitas, Reagan (left) goes to Girls’ Middle School. InMenlo visited with them at their home, aka farm, over the weekend to hear about their summer road trip – an adventure to a very special place.

Mom Lisa provided some background. The Newtons’ dog, a Bernese Mountain Dog named Grater, was great with the kids but was becoming increasingly aggressive with adults. He also had separation anxiety that manifested itself in ripping things apart when the family was out. Lisa and husband Tom consulted with a number of local vets; the consensus was that they should put the dog down. Since he was only seven, much loved and otherwise healthy, the family searched for alternatives and found the Best Friends sanctuary, where they placed him. After some work, Grater was eventually adopted by a new owner.

This summer Lisa and the kids made a pilgrimage to Best Friends, which is located on 3,000 acres in southern Utah and boasts an adoption rate of 70%. Before they left, the kids set up a lemonade stand that netted $67, and they decided to make that a start to raising money they could donate to Best Friends. “We ended up raising $800 and donated it to the Dogtown area of Best Friends,” says Reagan, 12. “The money is used to buy food and provide veterinary care for the dogs while they’re there.”

In addition to Dogtown, Best Friends has Cat World, Bunny House, Horse Haven, Parrot Garden, Piggy Paradise and Wild Friends. Because they are animal savvy and used to responsibility – the childrens’ daily chores include taking care of 5 horses, 17 goats, 4 hens, 5 dogs, a rabbit and a tortoise – all three kids were able to volunteer during their visit to the sanctuary, a privilege normally reserved for those 18 and over. They also met the people who had worked with their dog Grater.

Reports Presley, 8: “We did a lot of cleaning up.” Adds Blake, 10: “And we got to work with the cats and puppies.” The big thrill was having Leah,  a health-challenged dog – she’s blind and diabetic – come for a “sleep over” in the RV Lisa had rented for the trip.

We’re guessing that outing made Leah one happy pup. And the Newton kids were enthusiastic about every moment as they recalled the details of their stay at Best Friends. Let’s hope they get the chance to write that two-pager.