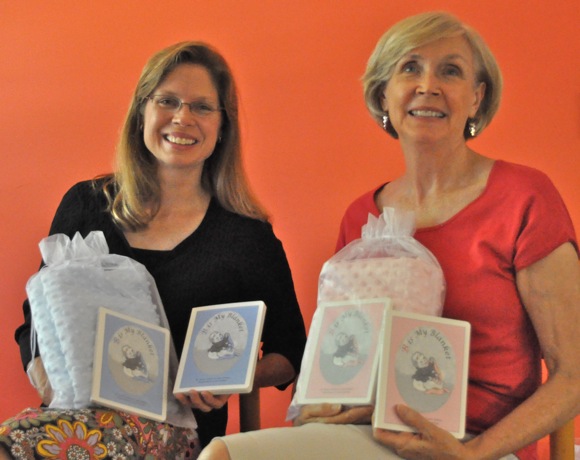 A chance meeting at Fitness 101 followed by finding themselves in the same writing class led Tammy Gerber and Louise DeDera to team up in a creative business partnership, TamiLou Designs. Their goal:  Produce a children’s book. Two years of hard work later they’re hoping the just-released B is My Blanket – packaged up with a pink or blue blanket – will be the perfect baby shower gift.

Neither women had experience in writing, illustrating or publishing children’s fiction. They did have life experience – Tammy as mother of two young children, one of whom called her blanket “B” and Louise as mother, grandmother, and kindergarten teacher.

“I had parents who told me I could do anything,” says Louise.

“For me, it was a little bit like living the American dream – coming up with the concept and seeing it through from start to finish,” adds Tammy.

The pair worked on every aspect of the product, including overseas sourcing of the blanket and safety testing on materials. They met weekly on Mondays while Tammy’s children slept.

“As a stay-at-home-mom, this was a great project to work on,” says Tammy. “We’re both really happy with how it turned out.”

The two Menlo Park residents – Louise for 46 years and Tammy for 11 – are now putting their energy toward getting the word out about B is for Blanket. Their website has a list of stores where the the book/blanket is available, including Alys Grace in downtown Menlo; you can also place an order by contacting the co-authors.

I love this photo and article! Thank you.