Col. Cotton gets his sparkle back – and talks aviation history 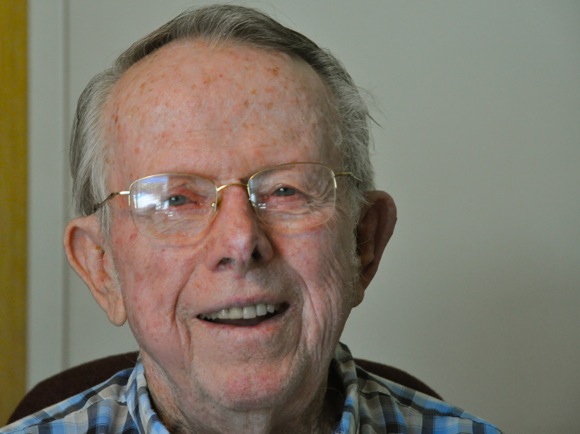 Col. Joe Cotton makes it clear that he isn’t a complainer. But a bout of ill health and the infirmities that accompany advancing age were, he admits, getting to him.  The worst was a post-hospital stay in a rehab facility. “Like being in jail,” he said, with just the trace of a scowl that failed to mask the twinkle in his eye. And that’s the good news for his family and many admirers – Col. Cotton’s got his sparkle back and the quick wit to prove it.

Over an hour’s discussion around the kitchen table of his Atherton home, Col. Cotton shared bits and pieces of his amazing life story – his rural roots on an Indiana farm, how he and Army Air crew mates evaded capture after being shot down over Greece in WWII, his long Air Force career as test pilot during the “right stuff” era, his later years as a United test pilot.

What he seemed to most enjoy on a bright September morning was chewing on the power of words and what they’ve come to mean to him. We’ve captured a sprinkling of this thoughts below; if they whet your appetite for more from Joe, including details about his aviation career, there’s a good account on Prop-Talk.

On thankfulness: “A physician I had, Dr. Raitt, talked about practicing thankfulness as one of his main treatments. If it hadn’t been for the Greek people, I wouldn’t be here. I’m thankful that a Nazi firing squad didn’t get a shot at me.” 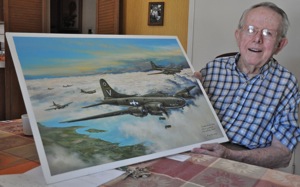 On contrast: “‘Contrast’ is the most fabulous word of all. Between plowing a field and flying a 747 or some of the experimental craft I’ve flown, the contrast is indescribable. People today would call it ‘awesome’ but I just can’t bring myself to use that word.”

On freedom: “There’s a chapter in a book called Aircraft Down about our evasion after being shot down. We’d lost our freedom. Same thing happened when those well-meaning people put me in the nursing home. It was like being locked up – I’d lost my freedom.”

On ethics. “I’ve signed a lot of aircraft photos over the years. Some guy wants me to sign baseballs – that’s just not ethical. Would you have Willie Mays sign aircraft photos – of course not!” (Note: there’s a nice post on Economist’s View about a Col. Cotton autograph.)

On aging: “Curly Britton was a flight engineer who I flew with on United tests. Now that I’m in my late 80s and slowly down while at the same time there’s so much technological innovation going on, I remember Curly’s words: ‘Don’t be down on the things you’re not up on.'”

On gratitude: “If I ever finish the book I keep talking about writing, I want to call it ‘The Frog on a Flagpole.’ You may have heard the story about the frog who wakes up on top of flagpole and looks down at the all the people below. He knows he couldn’t have gotten to the top of the flagpole all by himself. I didn’t accomplish what I did my myself. I’m grateful to everyone who helped me.”

On regrets: “That I never met Mike Wallace or Christiane Amanpour.”

My father was a Navigator in the Air Force from 1943 to 1966. Col. James B. Reed. He sometimes flew with Col. Joe Cotton. The name was spoken with great reverence in our home growing up. Dad would say, “Best damned pilot in the Air Force!” I spent many late nights and into the mornings with my father, and another friend, Jim Beam, listening to Air Force stories I will cherish to my grave. I saw Col. Cotton’s name on a Jet at the Air Museum at Wright Field, many memories came flooding back. While I was a small child, during most of Col. Cotton’s career, it my father’s stories of his literally tireless work ethic and devotion to what he and men like him did, that amazed and still amazes me. Col. Cotton is a true American Hero. I honor him as a true friend to my father, and our great Nation!

What nice comments left in tribute of my father. Thank you for your kind words and sharing your personal memories. He is truly one of a kind. We are very proud of him and all he has contributed to our country and flight history. We feel so fortunate that after all of his amazing adventures in WWII and the USAF as a Test Pilot and United Airlines Test Flight he is still living here in the bay area with his lovely wife Rema of 66 years.

I have the great honour of knowing Joe as a friend. A finer and more humble man you will not meet. I only wish that I could accomplish in my flying carreer a fraction of what Joe has in his career, both in the miltary and in civil aviation. I truely value our friendship.

I was United’s factory representative at both Boeing and Airbus for about 10 years. In that time period I accepted about 170 airplanes for United, all of which involved a test flight. Joe Cotton was the captain on the test flight which most sticks in my memory. It was 1978-79 and the airplane was a 727-200. We had flown out of Boeing field, completed two hours on inflight systems and flight characteristic evaluations, and were going into Boeing Everett field for a touch and go. A China Airlines 747 had landed ahead of us and was taxing back up the runway to the plant entrance (no taxiway at that time). The tower called Joe to make him aware of the 747. He acknowledged it and continued the approach. Shortly before we reached the runway, Joe slipped the 727 to the right side of the runway, flew by the 747, sideslipped back to the runway center line and finished the touch and go. Was it a big deal, it was for me sitting behind Joe in the cockpit, was it to an outstanding pilot who knew his ability and the airplane, I doubt it. A Boeing photographer just happened to be on the field for pictures of the 747 and got one of us flying by. I had it on my desk for years.